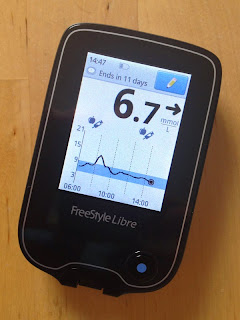 Last night the rumour mill reached fever pitch as Non Disclosure Agreements were stretched to their very limits. And this morning the Twitterweb was a-buzz with the news that Abbott's Freestyle Libre flash glucose monitor is to become available on the NHS from 1st November*. JDRF issued this nifty press release and everyone's second-favourite cat-loving pyjama-wearing T1 ex-schoolteacher and all-round good egg, Adrian Long, was even glimpsed on Sky News in the early morning undertaking some top Libre punditry and sharing his love of 'Libs'.

Of course, no sooner had the long-awaited announcement been made than people began to get a bit sniffy about it, or unbelievably optimistic - depending on their frame of mind. Either Libres were about to be handed out to everyone immediately, whether they wanted them or not; or it was going to be a postcode lottery / the end of CGM funding / a complete disaster.

The official announcement from Abbott covers the whole of the UK, including Scotland, Wales and Northern Ireland. Freestyle Libre will be on the 'drug tariff'. Which means that it will be able to be prescribed, and reimbursed by the NHS.

BUT (and depending on your point of view this might be a small niggle, or a deal breaker), this is subject to local health economy approval.

It's an important step, but it might not be the end
I think I probably come down more on the side of 'wildly optimistic' about the announcement. But the 'local health economy' / local clinical commissioning group (CCG) approval thing is a bit of a worry. Even the JDRF announcement is rather cautious, stressing how important it is that the technology actually does end up reaching people. There may still be some work to do in your area to encourage the bean counters to play fair.

Balance of costs
The cost to the NHS of one Libre sensor is going to be £35. For people using intensive insulin therapy who might be using 8 or more finger stick test strips a day, the costs more or less balance out. Assuming an average-ish strip cost to the NHS of £14.50/pot it costs the NHS about £2.32 a day for 8 strips, versus £2.50/day for Libre sensors lasting 14 days where you can be checking 15, 20, 30 times a day or more. I am reminded of the real-world data that Abbott shared recently. In general, across all their users, the more people used Libre, the better their results. Fewer hypos, fewer highs, more time in range and a lower predicted HbA1c.

Even if you are not prepared to take on the heaving behemoth that is your local CCG and try to turn them around to the idea, I can certainly imagine myself having an interesting conversation with my GP (who, of course, runs their own business) about exchanging my strips for sensors for all the added benefits that gives me. It may be that as part of that negotiation I suggest paying for my own strips for DVLA and other occasional requirements. The cost analysis undertaken by NICE for T1 demonstrates that 8-10 strips a day can be cost effective (more BG information is associated with better BG outcomes and reduced complication risk). There may be niggling details and rules about 'local formulary', but it's certainly a conversation I'd be interested in having with my GP if the local CCG drag their heels (as they have been known to do in my area).

Getting your GP and/or hospital clinic on-side and banging the table for you is a good plan too. Speak to them and get them to apply pressure to the CCG to ensure readers and sensors are listed in the local formulary (which is located at Hogwarts just down the corridor from potions and defense against the dark arts).

But what about 'proper' CGM?
Some people have worried that all these funds getting diverted to Libre will spell the end of CGM funding. Personally I don't see that happening. CGM is currently only weakly recommended in national guidance for people who have significant problems with recurrent hypoglycaemia and have lost all or almost all of their hypo warning signs. The submissions to the NHS for approval were very clear that while Libre can really help some people reduce their exposure to hypoglycaemia with extra information, they are not a substitute for CGM alarms/sensor augmented pump for those with no awareness.

Diabetes UK have put together a position statement on Flash Glucose monitoring which I was pleased to be involved in, and which I think clarifies many of the issues about the Freestyle Libre. What it is good for and who can benefit from it. Thankfully it involves people with Type 1 and Type 2 diabetes - and actually I think should be applied to anyone with any of the many types of diabetes who are intensively using insulin. The recommendations on page 4 are very interesting.

Of course some people have been able to carefully negotiate the fiery hoops to secure full or partial NHS funding for CGM in their own particular case. I'm not sure I see the availability of Libre as affecting the clinical reasons which led to their funding being granted - unless they wanted to swap of course! Freestyle Libre is not a CGM, and does not issue alarms. If those alerts are important to you, then CGM is the better option. But for others the lack of 'alarm fatigue' is a positive benefit of Libre.

Onward and upward
I am really encouraged by this announcement. It's been a long time coming and a lot of work has been done behind the scenes to get to this point. Huge thanks to Lesley and Melissa at INPUT, the team at JDRF and Diabetes UK, and not forgetting Dr Partha Kar in getting us this far.

I am absolutely convinced that Freestyle Libre has a huge potential to help thousands of people who are quietly struggling with their diabetes management. Not in extreme enough need with frequent A&E visits to attract CGM funding, but just keeping going not knowing what they don't know about their BG fluctuations. I really hope the technology can be made available so that those quiet strugglers can go from doing OK to doing really well. Can reduce their long-term complication risk and improve their quality of life.
Tags: bg meter, cgms, diabetes in the news, gadgets, NHS
Posted by Mike at 13:10
Email ThisBlogThis!Share to TwitterShare to FacebookShare to Pinterest