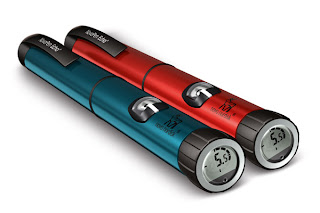 Update/clarification: Initially the Echo was said to be available only for children. However I now understand that the NovoPen Echo is available to patients of any age. The NovoPen 5 (currently not available in the UK) which has the dose memory, a larger max dose but lacks the half unit may be released in the UK at some point in the future.
Tags: insulin pens, Memoir Pen, NovoPen Echo
Posted by Mike at 08:59 23 comments:
Email ThisBlogThis!Share to TwitterShare to FacebookShare to Pinterest

The placebo effect and insulin pumps

This may be complete nonsense, but...

In the unlikely event that you have read these ramblings before, you might remember that I noticed a slightly strange quirk about a week after starting on an insulin pump. The levels which worked perfectly for the first few days went completely out of the window and I had to start again. I would probably have ignored this had it not been that two other people who had started insulin pumps at roughly the same time with whom I was comparing notes had very similar experiences.

Nothing very earth shattering about it, but just a sense of, "Tch! Fancy that!". I was reminded of the experience though when we finally managed to catch up with an episode of the 'i' series of QI (almost certainly a repeat) which we had squirreled away on the TV recorder. One of the guests was debunker of Bad Science Ben Goldacre. He and national treasure Stephen Fry touched on the subject of placebos. The question being, "How do they work?". The answer, unsurprisingly, was that nobody knows (you'll have to do the booming voiceover in your own head).

What was quite interesting though (see what I did there), was that placebos do work. And they work even when people know they are placebos! Not only that, but in clinical trials (if you can clinically trial something with no therapeutic effect) it has been proven that two sugar pills are more effective than one sugar pill. And that an injection of saline is more effective than sugar pills. It seems that a sort of sliding scale of increasing medicallyness (technical term) operates.

The mind is truly an amazing thing... It's ability to effect physiological outcomes in the body astounds me.

And it makes me think about this in relation to diabetic control. How much one's state of mind might support (or scupper) a person's best efforts. I note for example that my levels were unusually good in the week I had using a pump with saline. Presumably connection to the pump was enough in itself to get my body to exercise a little self-control. Then during the first week I was able to achieve very good levels with a fraction of the insulin I seemed to need around 10 days after. I'm not sure why it didn't last. Perhaps I'd just got used to the tech and it became more normal and lost its medicallyness.

Now all I need to work out is how to convince my mind to provide long-term perfect BG levels using the placebo of bars of chocolate.
Tags: insulin pumps
Posted by Mike at 10:14 6 comments:
Email ThisBlogThis!Share to TwitterShare to FacebookShare to Pinterest