My heart rate was significantly raised this morning while at the gym. Not because of my less than challenging treadmill pace, but because of a news item that came onto breakfast TV about the new food labelling system that is expected to be in place by the Summer of 2013.

I wrote about the public consultation on the subject that took place in July 2012. At that stage I was full of giddy optimism that my eloquently worded appeal would result in a Marvellous New World of clearly labelled, impeccably helpful packaging that assisted the entire UK in making better food choices, but in particular supported the millions of people living with (or at risk of developing) diabetes of one form or another - something upward of 5% of the population by 2010's numbers. The people for whom this stuff really matters.

The precise details of the new front of pack splodges are still being worked out, but from what I've read my life is about to get just a little bit more difficult and I'm going to be very grateful that my phone has a calculator on it.

I don't really have a particular problem with the traffic light system as an infographic device, my concern is based mostly on the information that the current systems display, and in particular the obsession with listing 'of which sugars'.

Let's just get this straight, 'of which sugars' is an almost entirely useless piece of information. Well, not quite. If you were comparing two products side by side that were virtually identical in all other respects, then perhaps 'of which sugars' might be worth casting an eye over.

The Really Big Problem is that most people *think* they know what 'of which sugars' means. People will believe (because they have always been told that this is the case) that all food with lots of sugar in it will zoom straight into the bloodstream, while food with no added sugar will be absorbed more slowly. Like most of the best misconceptions this opinion persists because it is almost true. Food with a large amount of added sugar is likely to hit your bloodstream fast. But there are many many foods which are broken down significantly faster than sucrose. And the REALLY Really Big Problem is that many of the foods that break down in the gut faster than sucrose (table sugar) are the very same ones that people think of as being 'healthy'. Brown or wholemeal bread, for example... Pretty much any breakfast cereal you can think of... Mashed or baked potato...

The Glycemic Index (or more helpfully the Glycemic Load which takes portion size into account) is a measure of how disruptive a food is likely to be to blood glucose levels. To measure GI a smallish number of test subjects are usually given 50g in carbohydrate of a particular food and then their blood glucose levels are measured to establish how fast the energy in the food hits the bloodstream. Simplistically, all carbohydrate is made up of units of monosaccharides (glucose) joined up in chains. The easier it is to break down the chains into glucose, the faster it will be absorbed. On the GI scale, pure glucose scores 100. Sucrose, table sugar scores a 'moderate' 60. Despite it's 'starchy' reputation the carbohydrate in wheat is very readily broken down and there is far less difference between white and brown versions than we might hope for - exact values will vary, but wholemeal bread is likely to be between 68 and 78. Yes, that's right... gram for gram of carbohydrate it's faster than sugar. When you begin to look at breakfast cereals things get even more bizarre as far as the 'of which sugars' is concerned. Cornflakes weigh in at a blistering 77-93, while Crunchy Nut drop a little at 72 and Frosties score a mere 55. These breakfast cereals will be slowed a little when eaten with milk, but completely counter-intuitively the ones with added sugar are *slower* than those without, presumably because the corn itself is so darned fast.

That's not to say that any of the foods I mentioned are necessarily 'off limits' for a person with (or without!) diabetes - but I really think we need to get over our obsession with sugar in this country and especially where food labelling is concerned. A low 'of which sugars' does not make something OK. It cannot be relied upon as a marker of how quickly the carbohydrate in a food will pass into your bloodstream at all. And for a T1 person playing at being their own pancreas, or a T2 attempting to eat in a way which helps their wonky metabolism this stuff really matters.

From a carb-counting type 1 perspective the proposed changes are also incredibly inconvenient. This fatuous obsession with the display of 'sugar content' means that prepackaged foods will, most likely, no longer display total carbohydrate content per portion, certainly not on the front of the packs. Sainsbury's made this change some time ago adopting a 'traffic light' system and it bugs me every time I need to eat something of theirs. I find myself scrabbling around on the back of the pack for the 3.5pt 'per 100g' details then have to fish out a calculator and endure some mathematic acrobatics to evaluate what my portion of a 326g pack will end up being in terms of carbohydrate. And it used to be just written there in big letters 'per serving'.

Of all the groups of people in the UK with a borderline obsessive interest in what food contains, the ones who stand with furrowed brow in supermarkets poring over pack labelling smallprint more often than perhaps any others are those living with diabetes. This initiative *could* have made our lives easier, it could have included GI indications as standard, and scored total carbohydrate as a proportion of Guideline Daily Amounts so that people went easier on carbs generally. Who knows - that could have saved 1000s of people from developing T2D in the first place if their metabolisms are already beginning to struggle. Instead we are stuck in the same old rut of sugar=bad, fat=bad, carbs=good which just isn't helping anyone.

I await next summer's pack designs with a heavy heart.
Tags: carb counting, diabetes in the news, food, rant
Posted by Mike at 13:21 7 comments:
Email ThisBlogThis!Share to TwitterShare to FacebookShare to Pinterest

I have an appointment on Monday to have bloods taken for my annual review a week or so later. As is often the case the mere hint of an A1c on the horizon has been enough to play havoc with my blood glucose levels over the past few weeks. Coming down with a cold hasn't helped either.

This time last year I was at a bit of a turning point. I had tried as hard as I could to improve my levels on MDI, and still felt there was improvement to be made. That review was undertaken at the hospital, and having discussed the ongoing challenges I was trying to tackle, the Registrar agreed that an insulin pump was a good option. I recognise that I am extremely fortunate to attend such a pro-pump clinic and after a few more appointments and a bit more prep, I was pumping before Christmas.

Regular readers (your gritty determination astounds me) will know that my journey towards an insulin pump was not entirely straightforward. I spent a great many years resisting the idea each time it was mentioned. Approaching a year into my pump experience I have just done a d-geek 'compare and contrast' exercise that convinces me more than ever of my position on the OCD spectrum - partly because it annoys me so much to have a key period of MDI results missing due to an *ahem* administrative error (I deleted them from one place before checking the place where I thought I'd copied them). I put together seven months worth of BG results side by side, matching 'tricky' periods like Christmas and holidays. I then examined them for a range of markers - BG average, SD, FBG in range, numbers of highs, numbers of lows and so on.

Without going into the minutiae (I appreciate I have to at least make a gesture towards allowing you to retain your will to live) the truth is I'm a bit deflated by the results. Since moving to the pump they are, in some ways, better than on MDI - but not really by very much. And if I'm honest I was hoping for the same transformations to my results that I'd seen in other people. People whose MDI skills I hugely respect, whose lives are busy and full of nice varied (and occasionally eyebrow raising) meal choices. People whose A1c's fell by a significant margin after a short time on insulin pump.

The trouble is I should be perfectly happy. My meter averages suggest that my A1c will be somewhere in the high 6's. To be disappointed by that seems ridiculous, but my last MDI result was 6.3. It is true that I'm having slightly fewer 'waffy' moments these days (thanks Dave!) but I've also had more readings in the 20s than I can remember thanks to multiple set failures which at one stage seemed to be happening fortnightly.

I still believe the pump is working for me - and having changed to Silhouettes a few weeks back I've not had a failure since - but by now I was hoping to have this whole thing sorted and be cruising along with more stability and less goalpost chasing.

I'll let you know what the result is when the A1c jury comes back in.

Today has been declared 'No D Day' by the original Diabetes Ninja, George Simmons. It's a chance... actually it's a downright order *not* to blog about anything diabetes-related today. To write something else. To share something about who we are and what we like to do. There's more to each of us than just a broken pancreas, pitted fingertips and endless mealtime shenanigans right?

I've read some great posts today so thanks to everyone who has shown me more of who they really are.

Last year I mentioned that I like watching films. This year, well... I've started painting again. I used to paint years ago, but when the kids came along things got busy and it just sort of slipped by the wayside. Last year I was experimenting with a spray-stencil for a poster I was doing and had so much fun that I later experimented with using spray-stencil and watercolour together to make an image. I quite liked the feeling of not entirely being in control of the outcome (*struggles to resist drawing a d-related comparison*).

If you'd like to see what they look like you can find some examples under 'paintings' here:
www.stripedpebble.com 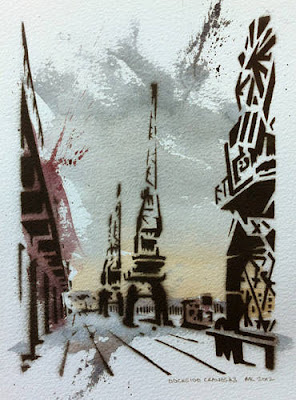 Tags: living normally, No D Day
Posted by Mike at 22:40 6 comments:
Email ThisBlogThis!Share to TwitterShare to FacebookShare to Pinterest