about the ridiculousness of your D.

I've been having a few unexpected low-level 'dips' recently. Not really hypos exactly, just a few readings under 4 where I wouldn't expect them. And the more of those I have, the more highs I seem to have too. Not ideal. Figured it was probably basal/warmer weather related, so thought I would do some basal tests.

On Monday evening this week I took the bull by the horns and took my entire basal pattern down by '1 notch' just so I could get some basal tests in.

I've spent Tuesday and Wednesday battling relentless highs. I did manage to get a semi-basal test in yesterday afternoon, which was inconclusive. I've gone from 'a bit too low' to 'pretty much continually too high'.

Woke to 10.8 this morning having gone to bed with what Artoo assured me was exactly the right amount of IOB to deal with my 10.6 at bedtime.

So now I'm back to where I started - basal back down again.

The really annoying thing is that I have two basic basal 'patterns' running. One for weekdays, the other for weekends. Initially this was just to account for waking up a bit later on Saturdays/Sundays, but 'weekend weirdness' soon meant that the weekend pattern was tweaked down and is now regularly only 80-90% of the weekday one. Even when activity levels seem identical I just seem to need less basal on weekends.

It's incredibly frustrating to have to fight relentless highs with a basal of 11.8u a day on Tuesday, when 10.6u on (Bank Holiday) Monday didn't result in those stubborn highs at all.

I think this is what grinds me down most about living with diabetes. Where on one week you put the effort in, count carbs, make corrections and levels behave themselves really nicely. But then another week you put in exactly the same amount of effort and use exactly the same approaches for the same meals that you know work well (because you experimented for ages to get to that point) - except that this time it just doesn't work.

And I pretty much know that my basal being 'out' causes this. And trying to fix it so that I can actually test basal has given me the high BG grumps. 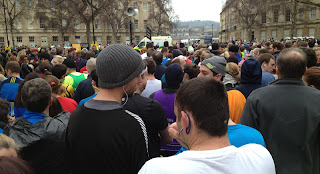