This time last week my mind was well and truly boggled by this point in the day by a torrent of information and the potential of shiny new things just around the corner (or already here). I was attending Type 1 Diabetes: Rise of the Machines #2 as a +1 of Kev Winchcombe, the #GBdoc's second favourite Nightscout Genius and holder of the Self Deprecating Diabetes Dad of the Year Award for the 9th consecutive year.

I'd heard a bit about the first Rise of the Machines last year and it sounded really interesting. The opportunity to go was actually very timely for me, because almost unbelievably this year sees the 4-year warranty expire on Threepio, my trusty and occasionally SmartGuarding MM640G insulin pump. As a result I am beginning to consider what options might present themselves for me to try next. The pace of change in diabetes technology seems so rapid at the moment that it's very hard to keep up with what has launched, versus what is being massively plugged but is still confined to the drawing board, versus what has technically launched but remains unavailable to anyone as no clinics either have them or are trained and equipped to dish them out. As an additional complication there are now various grassroots home grown combinations of different technologies that allow a degree of automation of insulin delivery (things like Loop, OpenAPS and AAPS). If you've never heard of any of this stuff prepare yourself for an impenetrable minefield of jargon, abbreviations and acronyms. Luckily for you Kev has put together a very handy dictionary of terms as part of T1resources.uk.

The main opportunities for improving T1 diabetes care are:
1. Improving the ability of a person to self-manage
2. Encouraging peer support
Everything else, whether technology, clinical, education or whatever falls into those categories


After introductions from Ben Moody of TechUK and Dr Partha Kar, a packed programme of fascinating presentations followed. I took copious notes thinking I might write a detailed account, but in reality there was simply too much to cover here so you will be relieved to hear that you are only going to have to wade through what struck me as highlights.

Chris Bright, semi-pro footballer and futsal supremo kicked things off with an engaging and inspiring PWD perspective. How different pieces of technology had formed part of his story with T1D, and supported him in exercise, activity and sport over the last 20 years, including the establishment of the Diabetes Football Community.

Next up were industry presentations by some familiar, and not-so-familiar names. Roche/Eversense, Abbott (Libre), Dexcom, then later Medtronic, Diabeloop and Tidepool. It was very interesting that many of the speakers from the companies lived with T1D themselves. The stories from the companies shared much in common. Technology is improving and continuing to improve. The more information (data) people have, generally the better they are able to manage their T1D. Some were able to talk about semi-automated insulin delivery and 'hybrid closed loops' which have either launched or are in the works.

One nice feature of the day was the round table discussions that took place after the presentation slots. The first of these involved the device manufacterer speakers who got something of a roasting from an audience which included several people who are actively trying to push the available technology to work harder, and are often frustrated by incompatibility and sandboxing where different devices are locked into their own predefined arrangements or are designed only to work within their own 'ecosystems'.

Interoperability (the ability of one device or technology to speak to a number of others) was certainly one of the buzz words of the day. The device manufacturers mentioned it, including the JDRF 'open protocol' iCGM standard which in development. But they were asked pointy questions about their 'bilateral agreements' for products in the works which will be designed to only work with devices from an agreed (and presumably negotiatied) partner manufacturer.

This is certainly well in evidence in the current market place and is all too often part of announcements about future tech. So Dexcom works with x and y, while Libre are collaborating with z, meanwhile Medtronic devices mostly try not to talk to any other devices if at all possible. While this almost certainly makes sense from a company perspective, it was a source of tangible frustration from users who might find a more open mix-and-match arrangement much more empowering.

The company speakers were clearly a bit nervy and uncomfortable committing to anything, preferring warm noises about 'taking steps' and 'working towards'. Abbott's decision to encrypt the data from its new Libre2 raised quite a few eyebrows, and when the explanation offered was that it was 'for safety reasons' one audience member described such a notion as abhorrent, "It's MY data! Give it to me."

The presentations by Medtronic, Diabeloop and Tidepool also shared many similar themes. Semi-automation of insulin delivery by smart systems that learn and continually adapt to the user's insulin needs as they ebb and flow. CGM data used to make minute-by-minute adjustments to reduce risk and severity of both hypos and highs, with the user only really needing to input carb count estimates for meals. All of these systems using their own algorithms and set-ups to attempt to increase the two emerging holy grails of T1 management 'time in range' and 'quality of life'. A technology which is both extremely easy to use day to day, but which gives improved outcomes. It was fascinating to hear the few snippets of detail that were sprinkled into the presentations - as always, I suspect the devil would be in the details, and whether or not it was possible to make any of these systems adapt to your own diabetes quirks. Tidepool's significant ongoing work to get a version of the 'open source' APS code approved for use by the FDA is very exciting - initially they appear to be partnering Omnipod as a delivery system. As for Diabeloop - the large Brexit-shaped elephant in the room was acknowledged in the subsequent discussion as they will not be able to launch in all European countries at once, and we could find ourselves rather on the back burner. 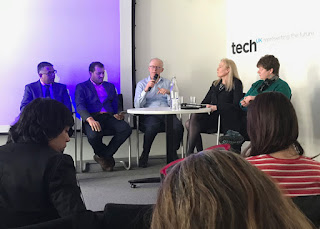 3 of the best
Clinical research and HCP perspective was offered in a round-table discussion jointly chaired by Diabetes UK and JDRF. Roman Hovorka (Cambridge), Pratik Choudhary (Kings College) and Lala Leelarathne (Manchester) shared their views on the current state of diabetes research and ongoing clinical trials from Loop and APS, to islet cell transplantation and encapsulation. The significant pace of change was clearly evident. In general the move from fingersticks to more continuous data and thereafter towards more automated insulin delivery. One of the challenges ahead would be to improve access to the emerging technologies and make that access more equitable. Additionally the challenges of accurately recording and monitoring 'quality of life' in health economic terms would become increasingly important in the future. Technology that you cannot access is little use. As is technology that is so onerous to use that it makes life miserable.

A brief break for a slightly delayed lunch allowed us all to catch up and compare notes from the morning's sessions.

Unfortunately I was not able to stay for the very last session of the day, but I was able to catch the first session after lunch which involved an overview of the currently available open source options chaired by Tim Street. One of the most emotionally charged and powerful moments of the day was presented by Jacob and his mum who had struggled through the required self-build steps in order to give her sporty teenage son the option to use a closed loop insulin pump. The brief video of Jacob's birthday morning and the look on his face where he unwrapped a box containing pump, reservoir, set, Android phone and CGM sensor caused more than one person in the room to wonder if it hadn't perhaps just got very dusty in there. Jacob's mum shared that it had been on leaving the first T1DRoM conference a year before that they had decided to take the plunge.

James Woodman's encouraging presentation detailing his own journey towards looping left many people wondering if looping might be right for them too. While acknowledging that it looks scary and formidable from the outside, both of these stories had at their heart the sense that, "If I can do it, so can you". In James's opinion, the barrier is less about technical difficulty and more about self belief. And also, I would suggest, in securing the components and consumables needed to run the various systems.

All in all it was a very interesting day, and certainly gave me a lot to think about between now and December. But I will save those ponderings for another time.

If you'd like to watch the presentations, a video of the day has been posted on YouTube here.
Tags: CGM, cgms, events, insulin pumps, research
Posted by Mike at 16:14 No comments:
Email ThisBlogThis!Share to TwitterShare to FacebookShare to Pinterest