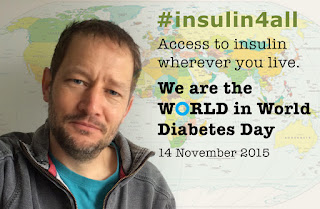 Today is Frederick Banting's birthday and also, not quite by chance, World Diabetes Day.

I was planning to post something on the blog today, but the appalling, tragic events in Paris last night have completely taken the wind out of my sails.

It doesn't really feel the day to be marking or highlighting anything else. My heart goes out to anyone involved, however obliquely. Parisians who now live in fear as they go about their normal, everyday, uneventful lives. And also to the many hundreds of thousands of innocent people who will now live in fear of violent Islamophobic reprisals.

But life, as the say, goes on. Instead of focussing on the division, violence and horror that a tiny minority are so evidently able to inflict, I find myself trying to focus on the exact opposite.

People, on the whole, are nice.

People, generally speaking, look out for one another.

People, more often than not, want to help - even if they may not receive anything in return.

People care about each other.

Yes of course there is selfishness, self-interest and general all-round rubbishness in human experience. Yes *some* people, perhaps even quite a lot of people, are prepared to do absolutely awful things.

I can see this in the Diabetes Online Community all the time. People wanting to support and encourage. People wanting to help. Wanting to affirm, strengthen, build up. People wanting to understand other people's point of view. People from wildly different social, economic and cultural backgrounds wanting to improve each other's lives. People willing to give of themselves without expecting, or requiring anything back, save to be part of a bigger, wider, more connected whole.

Better together. Better. Together.

T1 International and The Pendsey Trust are an example of this - attempting to co-ordinate and bring together support for #insulin4all - tiny charities raising awareness about the lack of access to essentials (insulin, test strips, education, healthcare) that many people with type 1 diabetes face around the globe.

As difficult as it can sometimes be to manage life with type 1 diabetes in the UK, it is a complete doddle compared to countries in the world where insulin is unavailable or unaffordable. In this day and age no one should die because they cannot access the insulin they need to survive.
Tags: DOC, insulin, World Diabetes Day
Posted by Mike at 16:46 1 comment:
Email ThisBlogThis!Share to TwitterShare to FacebookShare to Pinterest