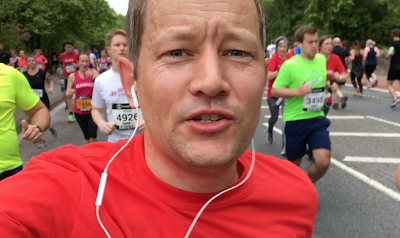 It's a few years since I did any running with much regularity, but inspired by raising money for a good cause, I found myself pulling on my trainers again in preparation for today's 10Km road race in Bristol.

If you are tempted to give running a go, there's a lot to be said for a 10K, it's long enough to provide a challenge, but short enough to remain fun, and the training runs themselves are relatively short and can fit in around a busy life. With great programmes like 'couch to 5k' you can gradually build up to running a reasonable distance from a completely blank sheet of paper - and once you are able to run 5Km repeatedly, you can leap to 10Km almost without really noticing - you just keep going at the same steady pace for a while longer.

Signing up to take part in an organised event gives your training some focus, and can help to motivate you as the time before the event reduces. There are also plenty of excellent training plans with runs and rest days that gradually build you up to 10Km and beyond. Despite my apparent grumpiness in the video I had a blast today. The field thinned out really quickly, and I was able to drop into a pace I was comfortable with very easily. There's always a brilliant atmosphere at these events and the route was lined with people cheering you on, samba drummers and live bands dotted around to lift the spirits. Even without that there is something special about running in a large group, and people often find they are swept along and encouraged into a slightly faster time than they might have achieved if plodding along on their own. Not that times are important, of course - it's more about just getting out there, having fun, and taking part.

Distance running with type 1 diabetes takes a little extra thought, but is relatively straightforward once you have worked out your system (which you can do during your training runs). For most people the main challenge is the possibility of hypoglycaemia caused by increased insulin sensitivity and glucose uptake of the muscles. I try to eat a reasonable amount of time before the run is due to start, and reduce my meal bolus a little - knocking off 10 or 20% usually helps. Eating a good while before starting running means that most of the bolus has finished working before the race starts. Being on an insulin pump, I am able to reduce my basal (background insulin) to only 20% of its normal level half an hour before the run starts and increase it to just under 'normal' perhaps an 80% TBR for a few hours afterwards. Some people find they need to take extra precautions for 24 hours or more as the exercise can make their normal doses overreach their needs a little. I was lucky enough to be able to wear a CGM during my run today, which was a great help in keeping an eye on things, but I have run longer distance races before with occasional fingersticks on the way around.

An extra motivation for people in taking on these challenges is often fund-raising, and I was really happy to be able to raise a little money to support 'Love Running' help both Syrian refugee children, and people in Bristol who are struggling with addiction, poverty, homelessness, and social exclusion. My fundraising page is still open for a week or two, and if you had a few quid to spare I'd really appreciate a donation, no matter how small. Make a donation.

Even more though, I hope you are encouraged to take the plunge and try adding a little activity into your life with T1. Whether through a big organised event like a 10k or half marathon, or something lower key like a 5k Park Run. Alternatively simply running, walking, swimming, hiking, dancing, climbing, a team sport, or whatever takes your fancy. With a little extra preparation there's no reason why type 1 diabetes should stop you.