Freestyle Libre - Going for the hat-trick? 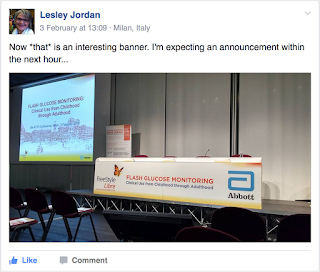 Abbott have been able to announce a couple of really exciting bits of news in the last few weeks. Just in case you hadn't heard here they are...

Libre approved for use in children
The lovely Lesley Joseph from INPUT was attending ATTD 2016 (Advanced Technologies & Treatments for Diabetes) in Milan last week and was excited to share a glimpse of one of the presentations where Abbott announced that they had achieved a license for Libre in children. This was enthusiastically shared on social media along with another of the slides from the conference with some of the details from the study. 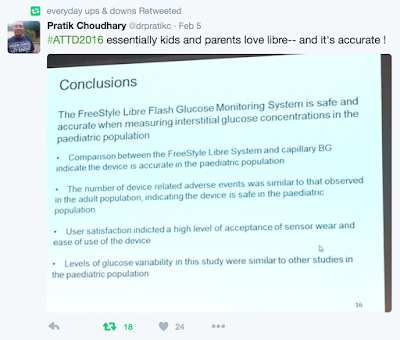 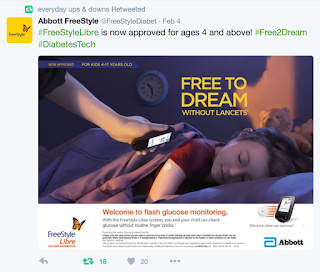 This is really good news for parents of children with diabetes who have been wanting to try the Libre as part of their diabetes management toolkit. It also reassures those who jumped in early before approval and used the Libre 'off license' for their children that they can now contact Abbott with a happy heart if they have any problems or need any advice.

Not to be outdone, Abbott themselves made an official announcement soon afterwards. Unsurprisingly choosing overnight testing as a particularly useful time to have a Libre in use. A lot less hassle to wave a reader through the duvet than to have to get a lancet out at 3am and rouse your slumbering child.

This welcome news came pretty hot on the heels of another long-awaited update in the story of the Libre...

No more waiting list
Following the launch of their new high volume production facility in January, Abbott have been able to clear the UK waiting list and the Libre can now be bought by anyone without having to wait. I heard about this a good few weeks back, but was a little cautious to mention it until I could actually see the results (we have been here before remember). However a week or so ago the news on TwitFace and other Social Bloggings was that, yes, the waiting list is no more. Hurrah!

At the same time, I had also heard from Abbott that they were beginning to roll out an official smartphone app that allows people who have a phone with an NFC chip to dispense with the reader and just use their phone to take Libre readings. I can't say much more than that as it has currently only launched in Sweden, but being able to ditch the separate meter certainly appeals to me. There are a couple of 'home spun' Android apps that attempt to do the same, but an official one from Abbott would reassure users that it has had to be put through all of the regulatory rigours of the handset itself. I will watch this one with interest (though I suspect as it stands no iPhone version will be possible because of the way Apple limits access to the iPhone 6's NFC chip).

I have not heard any more information about plans to launch either the Libre itself, or the app in more countries (though I know the UK is next on the list for app launch), but I have been promised a bit of a catch-up with Abbott in the near future and will keep you posted if I hear anything else.

The next big thing?
What would make this perfect for UK readers, of course, would be the announcement that the Libre was to become available on prescription via the NHS. Rumours and grapevine whisperings suggest that this might be tantalisingly close, but as yet remains elusive.

It seems there was much talk at ATTD about CGM (and other continuous monitoring options) and sensor-augmented pump therapy (Smartguard and other Artificial Pancreas dual or triple hormone technologies) so we will all be watching with interest.

If you hear any juicy gossip or rumours, do share them in the comments below.
Tags: cgms, events, Freestyle Libre, gadgets, research
Posted by Mike at 15:21
Email ThisBlogThis!Share to TwitterShare to FacebookShare to Pinterest