#talkt1 - Brainstorming a new model of care for T1 diabetes 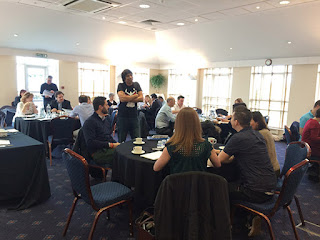 Bright and early on Saturday morning I caught the train to sunny Southampton where I had been invited to attend '#talkt1', and event organised by everyone's second-favourite rabble-rousing diabetologist and all-round live wire Partha Kar. It was a real honour to have been invited and the attendees to the event were an extraordinary who's who of passionate, committed T1 specialists, consultants and paediatrics, commissioners, DSNs, plus various NHS big-wigs such as Jonathan Valabhji and Diabetes UK's CEO, Chris Askew.

The majority of the party had gathered the evening before, for some presentations, talk of Vanguards and 5 year forward and time to think and talk together. This was not some back-slapping jolly though. These amazing people had given up their weekends to take a tough look at how type 1 diabetes care is delivered in the UK and to see if they couldn't begin to rethink it. One chilling statistic from Pratik Choudhary's presentation was recounted on Saturday morning:


Saturday morning began with some patient stories. Kev Winchcombe gave a moving account of the diagnosis of his daughter, and the huge journey they have been on ever since (yes that's right, I'm using the 'J' word - deal with it). Laura (ninjabetic) spoke of her initial struggles, lack of education (100 units a day and no instruction about balancing that with carbs!) and how connecting with others on Social Media has made such a difference to her self-care. Jens Birkenheim spoke of his frustration with not being able to find the sort of care he needed - or even where to start looking - which led him to begin setting up DCareFinder, a website that allows you to search for diabetes services near where you live. It was then my turn to talk about my experiences as a lay member of the Guideline Development Group for the NICE T1 Guidelines, how I came to be involved and whether I thought they helped me as a patient.

It was interesting to hear the same themes coming out again and again in each of these patient stories. The need for education, right from the start and as an ongoing part of living with T1D. The variety of care experiences in the UK, sometimes exceptional, other times disastrous. The value of using technology, digital-connectivity and peer-interaction as tools in our daily dance with T1.

It was then time for some thoughts from the diabetes 'legends' - Professor Simon Heller and Dr Fiona Campbell who spoke about adult and paediatric care respectively. One quote from Prof Heller particularly stood out to me. He said, "We don't often tell our patients this, but there is no condition which demands more of the individual than type 1 diabetes".

There was a lot of tough talk. A genuine sense that these people felt they could do better - and wanted to make that happen.

In the afternoon the room split into 4 'teams' each given a scenario of a hospital trust/healthcare setting and pot of cash. They were then asked to see what they could come up with (in a matter of just a few hours) as a new model of care for type 1 diabetes. "If we were starting from scratch," Partha said as he introduced the game, "I think we can all be pretty sure that we wouldn't end up where we are". Us patient-types were free to roam around from table to table and stick out oar in. Giving feedback as to whether we liked the ideas being floated. After a break for lunch, there was just enough time to draw the ideas together before they were to be presented to a guest panel of 'judges', including two CCG Commissioners and Roz Davies as a patient representative.

I'm not quite sure what Partha expected to get out of this scrap-of-time-workshop, but there were a number of very interesting ideas floating around as the 4 different models were presented. It was fascinating that no one really based their idea on needing a stack more money. Most of the thoughts were priced loosely within the specified budgets, and it seemed that these may have been thoughts that people had been musing on for some time. I didn't take any notes so can't really recount them in detail, but here are a few things which caught my attention at the time.


It was a really inspiring day. You got the feeling there were some real sparks flying. That if anyone could begin to stir up the current state of T1 care in the UK, then this would be a pretty good starting line-up. It will be interesting to see what comes out of it in the coming months and years. Huge thanks and much respect to Partha Kar for his energy and commitment to improving things for us pancreatically challenged lot.

If you want other perspectives on the day you can also read blogs by Partha, Roz, Laura and Kev.


Disclaimer. Very kindly, my train ticket was paid for and the lovely Kev W gave me a lift to the venue. Lunch was laid on, but all of us patient speakers gave their time for the privilege of being involved in such an amazing day.
Tags: NHS, NICE guidelines, talks and presentations, type 1
Posted by Mike at 23:33
Email ThisBlogThis!Share to TwitterShare to FacebookShare to Pinterest