Edinburgh, encouragement and a call to arms 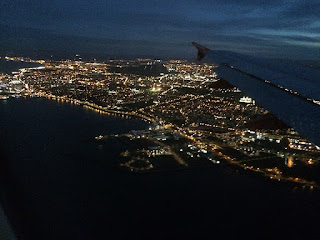 This week I have been lucky enough to be invited to speak at the 55th St Andrew's Day Symposium, hosted by the Royal College of Physicians in Edinburgh. I was given the topic of 'apps and technology' in relation to managing a long-term condition like diabetes, but obviously - not content with that - I managed to sprinkle in a wafer-thin analogy of what living with type 1 is like, along with all sorts of stuff about the #doc and the transformative potential of online peer support communities.

I tried to cover the infuriatingly fickle nature of type 1 diabetes, mentioned a few 'old favourites' like mySugr and the Accu-Chek Expert which have helped me attempt to tame my own 'diabetes monster' and also just a few of the many other things that I know help others in different ways. Gathering data and then learning to be able to apply it to make small improvements. Not forgetting, of course, the support you can get from those facing the same battles every day, whether in terms of just keeping going when it all falls to pieces (again!), or in people sharing experiences and strategies that work for them that you can consider for your own self-management. 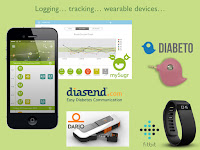 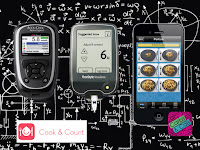 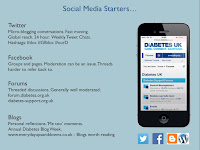 It seemed to go relatively well, and people were very encouraging - but the absolute stand-out for me about the whole experience were the conversations I had with some passionate diabetologists after the session had ended. I had deliberately avoided focussing too much attention on the more obvious technological advances like pumps and CGM, as I had wanted the talk to have as wide a reach as possible, and also perhaps fire the imaginations of clinicians working in other disciplines as to how they might make use of similar apps/peer support resources in their own specialism.

Speaking to those diabetes specialists afterwards was something of a call to arms. Much money is being spent on healthcare in the UK which does *not* have the ongoing quality of life benefit for individuals that sensor augmented pump therapy offers - let alone the extension of life for pump users as shown in recent research. The case was made to me that it is time the diabetes online community stopped being so darned understanding about the lack of funding for sensor-augmented pump therapy. The time for accepting defeat has passed, and as more and more data are made available from increasingly positive trials, we need to start banging the table if we are ever to move pump/CGM into the mainstream in the UK.

I got the distinct feeling that there are many clinicians who feel strongly that this is the way forward for type 1 care, but that patient voices as part of that change are crucial. Certainly the impact of patient support in Scotland's wider adoption of pump therapy in recent years sets an encouraging precedent.

Yes I *know* we go on about it all the time among ourselves (often with a resigned sigh and bit of self-funding) - but perhaps the moment has come to really start ramping up the pressure.


Disclaimer. My travel, and accommodation was paid for, but I was not paid to prepare or deliver my talk. I was also invited to attend a swanky dinner at the end of the Symposium which was lovely.
Tags: cgms, DOC, events, insulin pumps, talks and presentations, twitter, type 1
Posted by Mike at 18:28
Email ThisBlogThis!Share to TwitterShare to FacebookShare to Pinterest