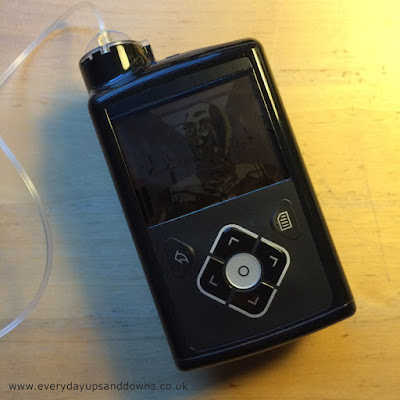 On Monday this week I popped in to see the lovely LJ the DSN at my Pump Clinic to collect my new pump. We had a nice chat and ran through the set up procedure before I pottered back with a little smile on my face.

You may remember that I posted about collecting my first insulin pump on 1st November 2011. Mostly for my own amusement, I began referring to my little robot counterpart as Artoo almost immediately (R2-P2 - replacement to pancreas #2, with MDI having been replacement to pancreas #1). Insulin pumps generally have a warranty period of 4 years, and my hospital were happy to replace my old pump fairly soon after that period had passed.

I could have chosen pretty much any of the currently available insulin pumps I think, and I have been tempted by the Animas Vibe for some time, though of course, that pump is now getting rather long in the tooth. Animas are well down the road of developing their next pump, but their new offering is not supposed to launch until perhaps 2017. I'm not sure exactly what the new Animas pump will bring to the table, though some sort of insulin-adjusting CGM integration seems to be rumoured. For the Vibe though, despite the attractions of the Dexcom tie-in I was wary of some irritating details of the bolus wizard on the Vibe and was very mindful of the absence of SmartGuard and potential alarm fatigue should funds permit some CGM usage for me.

Medtronic have timelined their new 'hybrid closed loop' MM670G for a similar period, perhaps 2017-2018 (which apparently will have a souped-up version of SmartGuard that aims to counteract highs as well as lows). In the end though, given my very positive experience of the MM640G, I decided to opt for that one. After all, those tantalising shiny, new, possibilities may not actually launch until more than half way through my next pump contract.

Given the almost stifling saturation of hype surrounding the UK launch of the new Star Wars film in 7 days time, I have not been able to resist revisiting that old joke again and so 'threepio' has become my new droid companion. Apparently he has a protocol for dodging hypos as well as communicating with moisture vaporators, but unless I have an unexpected windfall of 'galactic credits', sadly that particular function will remain little more than a futuristic fairytale.

In other, and slightly related news. I have already changed the Threepio's setup so that the homescreen displays as if I were using sensors. Partly this is because I prefer the look of the graph on it (even if the graph has almost no information to display) because of the irritating enormity of the '-.-- we have no fingerstick BG information to show you' dashed line. But also because that way I can use the graph data to track down the timing of my most recent bolus. Either as a visual ready-reckoner with the blue dot beneath the otherwise empty graph, or by drilling in to the graph view and scrolling back to see the exact time. Gathering the information this way takes only five clicks from 'standby' whereas getting the same information in the normal way from the 'status bar' takes seven.

Little things and all that.
Tags: gadgets, insulin pens, MM640G
Posted by Mike at 16:22
Email ThisBlogThis!Share to TwitterShare to FacebookShare to Pinterest