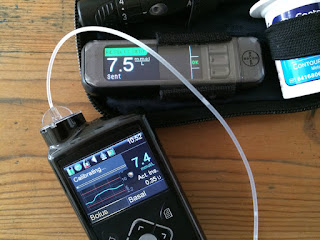 Well, this is it. The last of my posts covering my time with the Medtronic MiniMed 640G. Thank you so much for bearing with me over the last few months. Normal wittering will be resumed shortly. However, as seems to be the way of things with blockbuster franchises (HA!) I have split this last episode into two parts. Part (i) covers all the little niggles and irritations I had while using the MM640G, while part (ii) looks at the things I loved, and reviews my results including reductions (if any) in hypoglycaemia and an HbA1c I had done at the end of my time using the pump. HbA1c is the test which measures how much of the glucose in your blood stream has stuck to red blood cells. It is often used as a measure of your likelihood of developing the long term complications of diabetes.

For those who really can't bear wading through all those minutes of video I will summarise the results below. The video gives a lot more detail though, and features a fluffy bunny. What's not to like?!

When it comes to the things I really liked/disliked about the MM640G you will need to bear in mind that I am comparing to a MiniMed Veo. All of the really good stuff about pumps generally - precise basal patterns, advanced dual and square wave bolus options for tricky meals, ease of use, bolus calculator, temporary basal rates, precision of doses and correction factors, blah, blah, blah... are already assumed to be present and correct. Some of the things I loved about the MM640G are precisely because they fixed annoyances I found with the Veo. But more on that later. First:

The worst of the Medtronic MiniMed 640G

Those who have read any of my reviews before will know that I can get unreasonably irritated by the slightest things. It will come as no surprise then, that while I generally loved the MM640G both with and without sensors, there were a few things about it that drove me nuts.

The grumbles, gripes, and irritations - everyone will have their own, I'm sure.


The best of the Medtronic MiniMed 640G

Whether you use the MM640G with sensors or not there is a LOT to like about it. There are all sorts of little, pleasing improvements in the interface and options that make a massive difference. Add the wizardry of SmartGuard into the mix and things are taken to another level - but even without there are lots of tasty treats for non-sensor users.

Improvements to the pump (with and without sensors) and the all important results.

It has been a great privilege to experience the MM640G system, and for me the results were spectacularly good. The comparison with Libre data is an interesting one, particularly where hypoglycaemia is concerned. Times wearing a Libre sensor were previously my 'best ever' results-wise. The ability to spot hypos coming during the day and try to head them off (I generally scan a Libre sensor something like 30-40 times a day), plus the ability to spot low levels overnight and make hurried basal rate changes meant that I generally had fewer hypos on a Libre than I would normally. And yet when compared to these data, the MM640G system reduced my time spent in hypoglycaemia by 90%. To be clear, that means that for every 10 minutes I spent below 4.0mmol/L trying my very hardest with a Libre sensor, I would spend only one minute when using SmartGuard. That and my HbA1c dropped over the same period from 6.3% to 6.0%. 0.3% - it's not a huge margin, but those fractions are pretty tricky to shave off once you get down below 7.0 in my experience.

My only hint of melancholy about the whole experience is, of course, the eye-watering cost of full-time sensor coverage (approx £3,500 per year inc transmitter). It's not something we as a family can afford, and full time CGM on the NHS is reserved for those who really need it most - and rightly so.

It feels a little like being given a chance to live in a multi-million pound mansion and drive an Aston Martin for a few weeks to see how I like it. I may think it's brilliant - but the reality is that it's not really an option that is really open to me long-term.

I have a pump clinic coming up in a week or two and will see what they say about the results - particularly my unpredictable and occasionally lengthy periods spent below 4.0 overnight. These do nothing to help my efforts to keep my Imparired Awareness of Hypoglycaemia under control. I may ask about the possibility of part-time sensor coverage. Even a few months in a year would make a massive difference (as long as the transmitter continued to function, of course).

My Veo is nearing the end of its warranty period, so I am looking to the future. I have some thinking and some sums to do after this experience - depending on what my clinic say.

Disclaimer: I was offered a trial of the Medtronic MiniMed 640G system for 64 Days with full sensor coverage so that I could share my opinion and experience good or bad. I was not paid to write this post, and if I had thought the pump was terrible I would have written that. I was encouraged (not required) to post video blogs about my experience, but Medtronic did not have any control over what I posted.