A few weeks back I had my first ever 'Pump Clinic'. I've been in for a few individual appointments, but this was the first (presumably annual) review of how things were going. I had a 'spare' HbA1c that I'd been given at my last 'Annual Review' and decided that this was a pretty good time to play my A1c joker.

I was fairly pleased to get a result of 49 (6.6%), though my meter averages suggested it might have been a little lower than that. I am beginning to think that the Contour Link's habit of reading slightly lower than my old Expert means that the conversion I used to use to estimate an HbA1c from meter averages is now a little off.

I also had a full lipid panel done (my GP review in March had mistakenly only ordered a total chol figure which is not much use in my book). I was happy to see that my total figure had fallen slightly to 4.7 and the splits remain reassuringly promising (for cholesterol nerds: Total chol 4.7, 1.9HDL/2.5LDL, Trigs 0.6). Fingers crossed my old ticker has a few more years in it yet.

I'm not sure if the folks at the pump clinic had just had a particularly challenging morning, but it was lovely to have my Pump DSN and the Consultant who heads the clinic saying such nice things. It may have helped that the basal tests I'd been asked to do in the weeks running up to the appointment (and had been in the process of doing anyway) had fairly spectacularly improved my levels. Artoo and I have been plodding along for 8 or 9 months now, and we seem to have hit a bit of a purple patch. The weeks running up to my appointment were pretty good, and while I've needed to do a little more tweaking since (darned basal goalpoasts on the move again) I've had another few weeks of really good results.

I think I'm beginning to see what all the pump fuss is about. 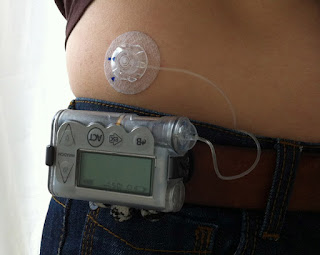 During the appointment there were slightly raised eyebrows when my sites were being checked, because of the way I was wearing Artoo. In the first few weeks of having a pump I got increasingly annoyed that the clip on the back only allows the pump to hang vertically on a belt. This meant that Artoo was sitting really high and frequently made his presence felt by digging me in the ribs. He went so far as to draw blood on one occasion when I was getting in and out of a car.

Almost all of the 'how do you wear your pump' comments I see on blogs and forums seem to be from women who smugly say how marvellous it is to be able to hang it from their bra. All very well for you lot with your copious cleavages and fancy undergarments, but not much use for me. For blokes it seems to be belts or pockets only. Like some sort of inviolable test of pumping man-dom. Since I have no room for anything else in my pockets I looked around for alternative clips. Medtronic do one described as a 'holster' (which appealed to my 8-year-old-Magnificent-Seven-loving self). I duly filled the irritating VAT/account creation paperwork, paid the exorbitant price and waited. Within an hour of eagerly sliding Artoo into it for the first time I knew that it was going to be hopeless. While yes, strictly speaking it does allow the pump to hang horizontally, it only does so with a sort of plastic 'back board' with the clip on which hangs vertically and is exactly the same size as the pump. Not only that, but the twisty mechanism is fairly loose so it's very easy to knock your pump into a wonky angle. Short period of tutting and grumbling. Original clip back on. 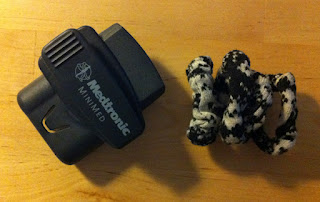 My solution (and the reason for the raised eyebrow) is pictured on the right of the lamentable 'holster'. It was a £1 scrunchie from Asda (other reasonably priced hair accessory retailers are available). Essentially a long loop of elastic with a cotton cover. Looped three or four times around my belt I can get Artoo to hang perfectly level by passing the clip through the loops. Because it's elasticated I can easily slide him left or right between belt loops, either more on the hip or more toward the front, to suit a seatbelt or whatever. Additionally the little bit of 'give' in the elastic means that I can tilt the screen toward me and read the display right-way-up without any 'having to get out of bag' complexities. Result!

I don't know if it is only me who had this struggle finding a the perfect method of positioning their robot counterpart, but if you are still struggling (and getting bruises around the waistline) I'd recommend a £1 scrunchie every time.

Where do you put yours?
Tags: annual review, insulin pumps
Posted by Mike at 17:45
Email ThisBlogThis!Share to TwitterShare to FacebookShare to Pinterest