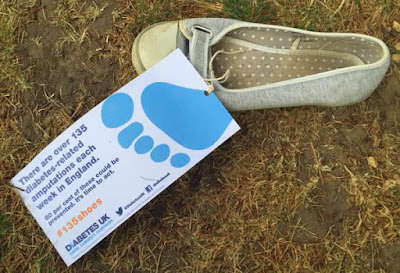 Diabetes UK have been working on their 'Putting Feet First' campaign for some time now, but today is the day they are really trying to hit hard with it. They are staging an event in Westminster featuring 135 shoes scattered across a lawn, each bearing a note of the impact that amputation, or living with the threat of amputation can bring. The statistic is horrifying, but even more gut-wrenching is the byline. Eighty percent of these amputations could have been prevented. Eighty percent. It strikes a particular chord with me as I am aware that Bristol, where I live, has a particularly high rate of amputations compared to the national average.

Having lived with diabetes for over 25 years I have spent quite a lot of time trying not to think about complications, but if you are lucky enough to still have all ten toes attached, just think for a moment about the impact on your every day life of losing one or both of your feet. Of the additional challenges that would come with a million every day moments. Stairs, nipping to the shops, running for the bus, running for pleasure, sports, shoes, paddling in the ocean, walking the dog... And for 108 of those 135 people, this devastating event might have been prevented.

Many of the people who live very real and very human lives behind this cold, hard statistic will be living with Type 2 Diabetes. They will be used to having people assume that this is all their own fault. That they should be ashamed of themselves. That they have only themselves to blame. Because type 2 is a 'lifestyle' disease, right? "Too many cakes and not enough exercise you poor, waddling excuse for a human being". Blah blah blah. So on top of the physical trauma and day to day difficulties faced, they will be heaped upon with guilt for the enormous cost of their treatment to the tax payer. What remains of their self esteem crushed beneath the weight of media, public and family opinion and in some cases even a medical profession that seems to overtly judge them as failures.

But is it really as simple as that? And even if you think it is, what fruit does that mindset bear?

Personally I don't believe that it is. There is a lot in this article, You did NOT eat your way to type 2 diabetes, that makes a lot of sense to me. Now that's not to say that I dismiss the concept of personal responsibility entirely. Of course not. If some people had made changes perhaps they could have dodged their diabetes diagnosis. But it just seems to me that many (most?) people who live with Type 2 diabetes were doing pretty much what everyone else was doing, it was just that their metabolisms weren't up to dealing with the semi-toxic combination of a modern Western diet and a massively wealthy and profit-hungry food industry.

But getting a diagnosis of diabetes (of either type!) surely should not inevitably lead to 135 people each week undergoing expensive life-altering surgery. Our understanding of managing long term conditions, like diabetes, seems to be improving year on year, and yet many of the outcome measures seem to be  getting steadily worse.

How can we change the balance so that there are only 81 shoes on the lawn?

Here are a few thoughts from my unqualified, unmedical viewpoint:


Well done to Diabetes UK for highlighting this important topic. I hope some action can be taken to reduce the enormous, unnecessary, financial and personal cost behind these statistics.
Tags: campaigns, complications, diabetes in the news, Diabetes UK
Posted by Mike at 13:09
Email ThisBlogThis!Share to TwitterShare to FacebookShare to Pinterest