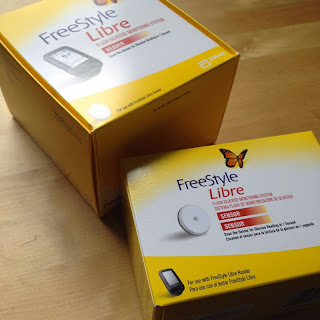 There were excited murmerings on Facebook last week and on Friday I received a phone call that confirmed what many, many people have been waiting for over the last few months.

I think it is probably fair to say that Abbott were a little taken aback by the level of demand for their new toy immediately after launch (the Libre 'flash' glucose not-quite-CGM monitor). It wasn't long before they realised that consumer enthusiasm was going to outstrip their production capabilites and they took a tough decision to stop taking on new customers in order to protect supply to those who had signed up first. Probably the right thing to do, but pretty frustrating for many people - myself included, who hadn't quite got around to registering with their e-shop early on.

Some people have got quite cross about this, but I'm more inclined to give them the benefit of the doubt. This was a completely new piece of technology in a relatively small market place (certainly in the UK). They had to anticipate what sort of level of early take-up there might be, but it's not entirely surprising that they didn't get it spot-on. And deciding to limit supply so that fewer people got better service rather than many people getting rubbish service seems to have quite a consumer-focussed feel to it. They didn't just take everyone's money and not deliver, they concentrated on ensuring that those who signed up early could get full-time sensor coverage if they wanted it.

But for the rest of us, the weeks turned into months... and still we waited.

As of last week they have begun to issue emails to people who signed up on the website. They are doing this on a 'first come first served' basis, so those who asked to be told when Libre was available to new customers in October/November 2014 will be hearing first.

Of course they will have to weed out a bunch of dead results from those expressions of interest. People who have changed their minds and so on - so if you recive an email you will need to act on it pretty promptly.

According to what I've been told by Abbott, it works like this:

Looking forward to receiving my email :)