Feeling lucky at the Houses of Parliament.

A week ago today I had the unexpected honour of being invited to the Houses of Parliament to a Parliamentary Reception on 'Innovation in Diabetes Care' hosted by Robert Courts, MP for Witney. Not your usual Tuesday.

Not only that, I had been asked to give a brief chat about the impact of technology on diabetes self-management.

The event was put together by everyone's second favourite flash glucose device manufacturer Abbott Diabetes Care, and it was great to bump into some familiar faces, including Diabetes UK's Chris Askew, as well as lovely folks from the Health Innovation Network, and various other luminaries, civil and public servants interested in healthcare. It's a bit unnerving to asked to speak to a room where speeches and introductions have begun "my lords, ladies and gentlemen" without that just being a jokey thing to say.

There was a buzz at the reception about access to diabetes technology, its importance and how access can be improved and made more consistent across the UK. Naturally there was mention of the emerging Libre accessibility map, but this was about more than just that one device. It was about recognising how far diabetes care has come, and the potential improvements to outcomes that have become possible.

Robert Courts, who is the MP for the constituency which is home to Abbott's shiny manufacturing plant spoke first, before handing over to Jared Watkin, the (surprisingly Welsh) president of Abbott Diabetes Care. Lord O'Shaughnessy Parliamentary Under-Secretary of State for Health later spoke about the Government's Life Sciences Industrial Strategy and promoting swifter access to breakthrough technologies. 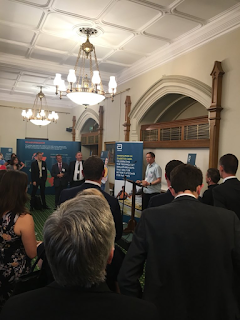 For my own small part I opted for three 'I feel lucky's.

I feel lucky I wasn't diagnosed 70 years earlier. I was diagnosed in 1991, and it was only 70 years earlier than that good old Banting and Best made their breakthrough discovery. Now we all know that living with type 1 diabetes is fraught with tales of lost feet, fried eyes and defunct kidneys, but it really wasn't all that long ago that us pancreatically challenged types really were not expected to last very long at all.

I feel lucky that it's 'only' diabetes. Now this, of course, is one of those phrases that you are only allowed to say if you have diabetes yourself (and even then only if you have the specific type to which you are referring). Having said that, and for all the looming spectres of physical and mental long-term complications, and the never-ending infuriating drudgery of the whole silly game I have often found myself musing that if I had been taken into a side room at the Drs on that fateful day 27 years ago and been presented with a table laid out with all manner of options, "We are sorry Mike, your number has come up and you have to have a long-term condition. Here they all are, with their pros and cons - you just have to pick one." I half wonder whether type 1 diabetes wouldn't have been a pretty good choice. You can eat pretty much what you like, within reason. You can do almost anything you want to. It doesn't stop you doing very many things that you might want to. You can actively work towards improving your situation and try to avoid the looming nasties. You can run a business. Run a marathon. Raise a family. And many people live long and healthy lives alongside it.

And I realise that much of my optimism stems from the advances in technology that I have seen over the years, and I'm thinking of technology in the broadest sense - gadgets yes like monitoring, insulins and insulin delivery, but also education and support networks.

I feel lucky that there has never been a better time to be diagnosed with type 1 diabetes. Which is probably a good thing because ever increasing numbers are joining our happy band. Even our own PM couldn't resist getting in on the fun. But the improvements in the technology and understanding we have available to us (at least available in theory) make the possibility of normal blood glucose outcomes tantalisingly close. And when you consider the emerging semi-automation of insulin delivery technologies alongside continuous glucose data, then the burden of self-management looks likely to reduce in the coming years.

I see access to technology (alongside education and support) as key in shifting the balance between the 80% of the diabetes budget currently spent on treating diabetes complications and the 20% spent on trying to keep people well. We may not be able to get those proportions to swap around, but I'd love to get things nearer 50:50 - hopefully by significantly reducing the financial and personal cost that comes when people with diabetes really struggle.

Oh and if all else fails, 'the cure' is only 10 years away too. Isn't that right Dave?


Disclaimer. Abbott Diabetes invited me to share my experiences of diabetes technology at the Parliamentary Reception, paid my travel expenses and offered a modest honorarium for my time at the event. They also laid on some tasty sandwiches and a very nice custard tart which I miraculously managed to carb-guess and SWAG bolus. I wasn't asked or paid to write this post or asked to mention any Abbott products in anything I said, which is lucky really because I pretty much didn't.