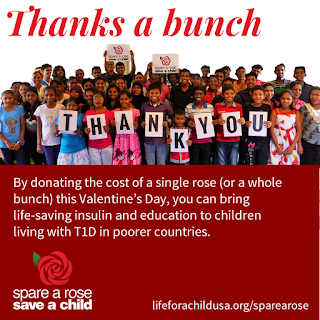 I'm sorry to break it to you folks, but things don't look very good for 'us lot' in the event of a zombie apocalypse. But in the world as we know it, where a life-saving medication has existed for nearly a century, it is horrendous to think that people, particularly children, might die for lack of insulin. But they do. For all our 21st Century self-congratulation about the ever-shrinking world and our technological marvellousness, access to healthcare remains far from universal - even in the allegedly 'developed' world. In poorer countries insulin may be all but impossible to acquire, or afford. And without insulin, we die.

It has been great to see quite a bit more attention given to the annual 'Spare a Rose' campaign from folks in the UK this year.

There is something so elegantly simple and profound about the 'Spare a Rose' concept. It takes a gesture of affection, a token of love, a symbol of intent - one which is so inherently transient and passing - how long to those roses last? A few days perhaps? And turns it into something genuinely powerful. Something almost heroic - saving the life of a sick child. The cost of a single rose equating to a month's worth of insulin.

Spare a Rose addresses so significant a need for people living with type 1 in some of the world's poorer countries. I think it's something everyone living with type 1 diabetes in the UK has considered, even if only in passing, at least once since their fateful diagnosis day. What if I lived somewhere else? What if insulin was very hard to get hold of? Or impossible to afford? There but for the grace of God...

I first came across the idea of Spare a Rose a few years back, and the campaign itself dates from 2013. A few of the great and the good of the #doc have enthusiastically supported the idea, particularly in the US where the idea began. The surge of attention in the UK this year is largely down to everyone's second-favourite irregular-blog-posting chucklefest Chris 'Grumpy Pumper' Aldred. Historically the UK's contribution to this particular charity pot has been rather on the small side, but I suspect, with your help dear reader, that things could be rather different this year.

'Spare a Rose' resonates, I think, because it focuses on a celebration of love. It takes the familiar commercial overindulgence and perhaps asks us to think about what it really means to express love, or care, or affection for others. Both those close to us, and also those we have never met. The idea is that you give one fewer rose to the special someone in your life, and donate that small saving to provide insulin and education for a child with type 1, living in some of the world's less resourced countries. Spare a rose, save a life. And it says something wonderful about people with diabetes coming together and connecting for the common good. Lots of people, giving not very much, all around the world, adding up to literally thousands of saved lives.

Something significantly more than the sum of its parts.

If you would like to save a child's life today, visit lifeforachildusa.org/sparearose and do something amazing. 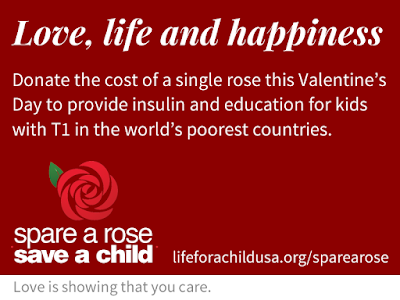 If this subject has caught your attention and you'd like to know more about projects seeking to ensure global access to essential treatment for people living with type 1 diabetes I'd also suggest you look into #insulin4all which is an initiative of T1international.