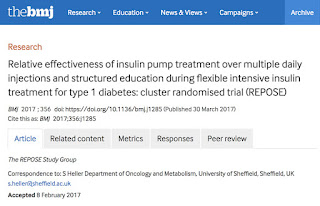 I'd be interested in your thoughts on this trial, and how you think it might impact you in your journey with diabetes. Please do leave a comment below.
Tags: basal-bolus, gadgets, insulin pens, insulin pumps, NICE guidelines, pump-averse, research, twitter, type 1
Posted by Mike at 14:22
Email ThisBlogThis!Share to TwitterShare to FacebookShare to Pinterest