Yesterday was the anniversary of Frederick Banting's birthday (one of the clever chaps behind the discovery of insulin) and, not coincidentally, World Diabetes Day. Here are a few things that caught my eye: 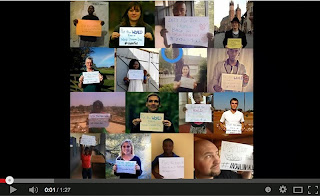 #insulin4all
Perhaps one of the most moving initiatives on the day came out of a collaboration between teeny tiny diabetes charity The Pendsey Trust and t1international.com who are seeking to break down the barriers across the world that prevent so many people from accessing insulin. Or which mean that they have to weigh life-saving medication against food or shelter for their families. The YouTube video clip explains it far more eloquently.

You can add your support on the insulin4all tumblr blog too.


Enjoy Food
Diabetes UK chose World Diabetes Day to launch their 'Enjoy Food' campaign. It's good to see an 'everything in moderation' and 'nothing is off limits' feel to this campaign - especially from a type 1 perspective. I confess I have a tricky relationship with some of the dietary advice that DUK have dished out over the years, particularly for people with type 2 diabetes. It is a great relief to see them backing off from their 'all carbs, all the time' mantra more recently and actively stating that all carbohydrate becomes glucose in the blood. Bizzarely DUK still seem to be stridently anti-fat despite much recent research (including this) and even the British Heart Foundation recently confessing that there was no longer any real evidence to support its historic 'avoid fat/go for polyunsaturated' guidance. But hey... one thing at a time.


tweet tweet
There was quite a lot of twitter action again this year including the amazing 24-hour #wddchat2014 which saw global DOC communities uniting again and passing the tweet-chat baton around the world. Pressures of work meant I was not able to take part much this year - but somehow it's good to know it's going on around you. Huge thanks to Cherise (@DiabetesSocMed) for organising it all. 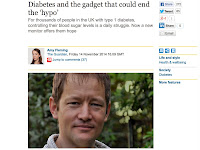 Fame at last?
I was chuffed to be contacted by the lovely Amy Fleming at the Guardian newspaper a week or two back who was planning a story about the Abbott Freestyle Libre and was interested in including some of my ramblings on the subject. All I can say is that the picture desk must have been rather frantic (or all at the pub) when the story hit the website as they went with my ugly mug by way of illustration. Even more surprisingly the article is factually pretty spot on, and even carefully differentiates the type of diabetes in question. Given the number of horrendous diabetes gaffes in the media I have a sneaking suspicion that Amy Fleming might actually have diabetes herself, or have someone very close to her that does - either that or she's just very, very good at the ole journalism lark. You can read the article here.
Tags: diabetes in the news, DOC, insulin, World Diabetes Day
Posted by Mike at 18:28
Email ThisBlogThis!Share to TwitterShare to FacebookShare to Pinterest