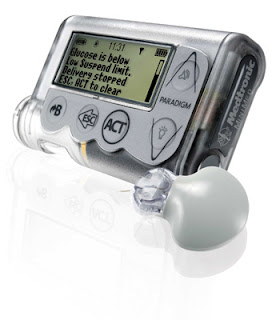 The theme of this year's Diabetes Week is 'I can...'. Here's a guest post I was invited to write for the Diabetes UK blog.

When I was thinking about this year's theme of 'I can' I was reminded of a conversation I had with someone last week about insulin pumps. It was something that they were being encouraged to consider, but like pretty much everyone else (myself included) their initial reaction was uncertainty. Uncertainty over being connected to something 24 hours a day. Uncertainty about relying on a fragile piece of technology to keep them alive. Uncertainty about how it would make them feel and how others might view them. Uncertainty over whether it would actually improve anything at all. In short, they didn't really think it was for them.

I know those feelings well. I had them all, and many more besides. I was 'pump averse' for many years. My clinic suggested that it might help with my recurrent hypoglycaemia, but could never really articulate how that might happen. All I could see was a big bunch of (what I thought were) downsides.

In the end, for me, it was reading the experiences of pump users online that convinced me to give it a go. The day to day nitty gritty of how it helped them. Now I'm not saying that insulin pumps are for everyone. Some people wouldn't want to touch one with a barge pole, others do just fine on Multiple Daily Injections and are completely happy as they are. But if it is something you are considering, here are a few 'I can's that an insulin pump has given me to add to your thinking:

If I want to go to bed at 5.0mmol/L, I can.
Ahhhhh basal! I have been through quite a few basal insulins in my 25 years of pancreas-impersonation. In the old days we were always advised to have a snack before bed. Why? Well because in all likelihood your basal-du-jour was going to be a bit over-enthusiastic in the early hours and could well plunge you into an overnight hypo. It was many years before I discovered 'basal testing' (systematically adjusting your basal insulin by fasting tests so that it just holds you steady) but try as I might, even with fancy schmancy analogues I could only ever get my basal 'near enough' on MDI. A bit too much here, not quite enough there... make up the differences with meal doses and guesswork. With a pump, the flexibility of multiple basal patterns which can be tweaked and changed with almost infinite precision mean that I can adjust things so that I am actually starting from a level playing field. To my mind, basal is the bedrock of my BG levels. If my basal is out, even by just a little bit, my meal doses and corrections just do not play fair. So I no longer have to worry about stocking up on carbs before bed, because my basal insulin should hold me level and when I need less insulin overnight I get less. Where I need more just before breakfast, I get more.

If I want to give a really accurate dose, I can.
My doses on MDI were often a bit 'ballpark' to be honest. I have always counted carbs and altered my doses based on what I am eating, but I usually rounded up or rounded down to make things easy. Plus I would use insulin:carbohydrate ratios that meant I didn't have to get a calculator out all the time. The Accu-chek Expert was a great tool on MDI for tweaking doses, but I was still using a 'whole unit' pen so there was a degree of rounding even then. Now I can bolus in decimal places. And those tiny tweaks of insulin here or there do seem to make a difference. True enough my carb estimates are still often done by eye, but at least one part of the puzzle is now being calculated and delivered precisely.

If I want to stop here for lunch, I can.
This was the biggest surprise for me. Rediscovering spontaneity. I began pumping with an fairly entrenched anxiety about being hooked up to something 24/7. I know almost no one who has not had that when considering an insulin pump. Many people say that within a few weeks (days for some people) they become completely at one with their new robot pancreas and never give it a second thought. I can't say that it was quite so quick for me, but certainly in less than six months I had stopped noticing being attached at all and my emerging 'unthought' behaviours (like automatically hooking it to a t-shirt when getting changed) meant I never really gave Artoo another thought. If you are newly on an insulin pump and it still feels a bit of a nuisance or 'in the way' hang in there. Where was I? Oh yes... Spontaneity. So I was well prepared to dislike being attached, but I really hadn't expected that attachment would turn out to be such a bonus. Out on a wander on holiday... get a bit distracted and it takes rather longer than anticipated... Oh this pub looks nice, shall we stop for lunch? What would have always previously been "No we can't, I didn't bring my pens with me" has simply become "Yes!". Wherever we are now I always have my 'kit' with me, and while I used to like the idea of being able to leave all this stuff on a table and just walk around 'like a normal person', personally I have come to realise that I feel much more 'normal' if I can eat whatever I fancy whenever I want to, without having to remember to bring a case full of gubbins with me everywhere.

If I want to have 20 boluses/corrections/snacks in a day, I can.
Well strictly speaking I always could have, of course. But in reality I never did. There is something so easy and effortless about push-button dosing that I am far more likely to add in a fraction of a unit here or there during a day when I recognise that I probably wouldn't have bothered to get a pen out, airshot, dial up and inject. This has increased freedom around snacks too. Where I previously found them just to be too much of a hassle on MDI, almost always resulting is a BG wobble in one direction or other (depending on whether I had bothered to bolus or not) I've had much more success with the effortless mini-doses a pump offers. It's easier, so I bother to do it.

If I want to run a marathon (or just vacuum the stairs), I can.
Again, this was something I more or less tamed with MDI, but the additional options available on a pump, like the ability to set a 'temporary basal rate' for several hours, have added considerable 'polish' to many of those day-to-day conundrums of physical activity. I am far less likely to see my BG levels dip below my target range when exercising these days and I'm buying far less Lucozade!


Just a few things of the top of my head. I'm sure most people on pumps could write their own list. Of course diabetes is still annoying and frustrating quite a lot of the time. A pump is not a magic bullet and it still involves a fair bit of faffing about. But for me having a pump has made a tighter set of BG levels more possible, with less effort and far, far fewer nasty lows.

If you are struggling with wrestling your diabetes into some sort of submission and have been offered a pump as a possible way forward I'd suggest giving it a go.

If I can do it... You can.
Tags: Diabetes UK, Diabetes Week, guest post, insulin pumps, living normally, pump-averse, type 1
Posted by Mike at 16:15
Email ThisBlogThis!Share to TwitterShare to FacebookShare to Pinterest