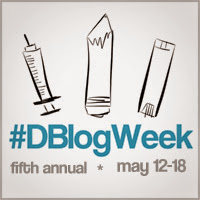 Thanks to Karen Graffeo this week is the 5th annual Diabetes Blog Week.

Today's topic is 'Change the world'.
Let’s kick off Diabetes Blog Week by talking about the diabetes causes and issues that really get us fired up. Are you passionate about 504 plans and school safety? Do diabetes misconceptions irk you? Do you fight for CGM coverage for Medicare patients, SDP funding, or test strip accuracy? Do you work hard at creating diabetes connections and bringing support? Whether or not you “formally” advocate for any cause, share the issues that are important to you. (Thanks go out to Kim of Texting my Pancreas for inspiring this topic.)

Hmmmm... Well I'd usually bang on about the power of peer support and the DOC, but since my last post was about that very thing I've decided to take this topic as more of a fantasy 'what if anything were possible' type thing.

So if it's not a cure and diabetes is continuing and if I could change anything what would I choose..?

I wish there was more honesty and fairness. Specifically when it comes to medical research and product development.

Perhaps I have got this wrong. Maybe I'm just being too jaded and cynical. I am absolutely sure that most people who undertake research are paragons of honesty and integrity, but I'm afraid I do worry about the impartiality of some research studies into new treatments which are (inevitably) funded by the companies who have invested thousands in research and development and now need to turn a profit. Small, commonplace things like studies having a 'run-in' period where carefully screened participants get to try the therapy before the trial actually starts so that people who don't get on with it don't take part. Hey-presto, when the trial data are collected - almost no drop-outs and hardly any side effects reported. Results being extrapolated and amplified with 'mathematically modelled' outcomes. If x changes to y then the model suggests that umpty bazillion people will be 50% better off (rather than simply counting the number of events that did or didn't actually happen in the sample population). Data meta-analysed to within an inch of its life and suddenly the conclusions reached 12 months ago that there was not very much benefit, get republished with a handful of results added to suddenly show something startlingly different.

The problem for me is that it actually takes quite a lot of effort to go into the detail. Part of my work with NICE as a patient representative on the Type 1 Adults Guideline Development Group has involved reading and reviewing many more research papers and results than I would ever have normally. It soon became clear to me that behind the confident assertions of the 'conclusions' by the authors of some papers there's a sort of hollow flimsiness to the whole thing. And in these days of 'evidence based' medicine this gives me more than a little uneasiness. Some major decisions are taken about what is or isn't an appropriate way of treating people are taken on the basis of medical research results some of which - to my inexperienced eye - looks rather less than rock solid. But who does that? NICE are pretty good at trying to filter though the mire most of the time, but so many decision makers, politicians and journalists seem only interested in the headline.

Now I'm not quite in the 'the whole thing is a complete Big Pharma Conspiracy' camp, but I do wish we lived in a world where I didn't have to worry about the motivations and financial background to all this. Where I didn't have to look for the agenda behind the research. Where new treatments and therapies and approaches were developed, adopted or dropped on the basis of what actually worked for people rather than what made the most money for the companies involved.

I realise that I am extaordinarily lucky to live in a country with an organisation as amazing as the NHS to underpin my healthcare, but there is only so much money to go around and I would love it if every single penny of that was being spent in the very best ways on the most effective treatments, interventions and (shock horror!) non-drug based methods like, er, you know, type 2s doing rather better when they eat fewer carbs.

Oh... and if I ruled the world Bakewell Tart would have absolutely no effect on blood glucose levels too.