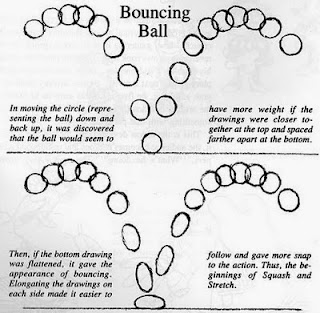 I was remembering back to my heady art college days recently, particularly some early experiments with animation. Animators at the Disney studios developed 12 principles of diabetes animation in the 1930s, including anticipation, follow through, slow in/slow out and, of course, squash and stretch. All these seem to have an uncanny resemblence to how my blood glucose levels have been behaving.

From time to time (read more or less constantly) I seem to go through periods of change where I need tweak various doses, ratios and settings in order to get them to behave normally*, so that the dose and timing of insulin for a meal which worked perfectly last week might be expected to work again for the same meal this week - in the SAME way (craziness!).

* I realise, of course that this has no actual meaning in day-to-day diabetes management terms. But it is, nevertheless, a nice idea.

An obvious one might be during a period of illness. You expect your insulin requirements to increase at some point, to some unknown level... but it's very difficult to actually anticipate with any certainty what the change might be and when it might happen. Even with illness, some coughs and colds behave completely differently to others BG-wise. Some are all up front. And it's only later when the sore throat appears that you understand why you've been fighting double figures (200s for US readers) for days. Other times you can have all the symptoms of a stinking cold, but BG just potters along entirely unaffected. Then if you have needed to up all your basals and/or doses, you know that at some (again unknown) point in the future you will need to rein them all back in again or you'll be landed squarely in hypo-central. 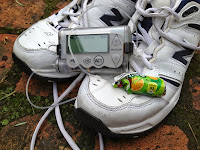 Another favourite is a fall-off of gym visits during a school holidays. I'm just coming into that now - the girls break up for Easter today. As the rhythm of the house changes I find it all but impossible to get up and out early enough to get to the gym and still be able to start work on time. For the first week things often toddle along as normal, but then one day in week two BAM! It's as if my insulin has turned to water. So I try to make sensible, small changes to basals. Enough to have an effect, but not so much as to go too far the other way. The constant balancing act. This usually involves a frustrating few days of doing battle with double-digit readings, however careful I am being with food and carb counts.

More recently I have also noticed an unusual phenomenon which I will be watching with interest this time. In animation 'slow in/slow out', 'squash and stretch' and 'follow through' refer to a more realistic way of handling movement. Movement tends to begin gradually, then accelerate, then slow again into changes of direction. You can almost feel it in yourself as you move about. Squash and stretch and follow through relate to the way animated objects often appear more satisfying if there is a little elasticity added. Rather than just stopping hard at the end-point there's a little extra movement beyond it and then a bounce-back to rest.

This seems to be exactly what happens with my dose tweaks too. I battle with highs for days struggling to find the right level of increase. Then I find it and I get perhaps a day or two of good numbers. But then I seem to get a little 'bounce back' and have a day of low readings where I have to dial the adjustments back down again to counter. And then things settle. At least for a while... before we're off again.

I think it's important for Healthcare Professionals to understand the relentlessness of these daily adjustments when they peer rather disparagingly at a printout of ropey numbers. There is no 'right' set of ratios and correction factors, only 'right for now'. This darned condition doesn't stand still for a minute and all the time you are playing catchup you are logging results that are outside of what you'd like to see, not because you are not trying hard or putting the effort in, but just because the rules have changed. Again. If I get a settled week or two I count myself lucky. But I know that membership of #teamsmug is usually very short lived.

Tags: basal-bolus, carb counting, dose-adjustment, family, food, it was bound to happen, units
Posted by Mike at 17:47
Email ThisBlogThis!Share to TwitterShare to FacebookShare to Pinterest