Does social media empower patients or confuse them? 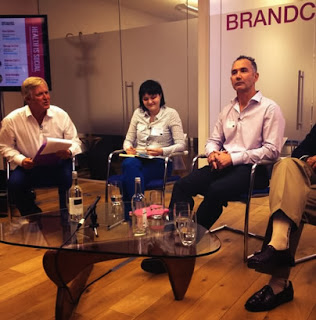 That was the question posed at an event held by Brandcast Media as part of Social Media Week London yesterday (no, me neither). I was chuffed to be invited to attend by Diabetes UK whose 'Digital Engagement Executive' the irrepressibly perky Amy Burton was speaking on the panel. Alongside her were George du Toit a Paediatric Allergy Consultant, Andrew Schorr 2x cancer survivor & founder of Patient Power and Sneh Khemka, Chief Operating Officer of Advanced Oncotherapy. Charlie Grieve, Brandcast's CEO holding the reins and gently steered the conversation.

When I arrived at Brandcast's groovy offices just off Regent Street the room was already filling up with a heady mix of cool and confident Social Meeja types, healthcare professionals and charity representatives. By the time the discussion started it was standing room only. I found a quiet spot and spent a few moments debating whether to avail myself of the funky Moleskine-esque notebook in Brandcast's signature bright pink. I gave Amy some encouraging smiles and nods.

What followed was a fascinating conversation about the impact of Social Media on patient experience. Almost inevitably the event was live streamed, and heavily tweeted under #smwdigitalhealth. Andrew Schorr gave a powerful account of his own experience, where the information and confidence he received through social media interactions led to him receiving completely different care, without which he quite probably would have died - "Social Media saved my life". Here are a few other snippets that stood out to me during the course of the evening:

"I have not a doubt in my mind that social media is empowering patients. But you need to know where to look/where not to look" Sneh Khemka

"Medics are, by and large, cautious of social medial" George du Toit

"Some social media platforms are becoming the Trip Adviser of hospitals. Patients can assess the quality of their own care" Sneh Khemka

"What one change would I like to see? For more HCPs to engage with online communities" Amy Burton

As expected there were some concerns raised over the nature of some of the 'advice' in circulation in the FaceBlogTwit-o-sphere, over privacy and the potential (mis)use of data shared over social media, some of which can be quite staggeringly personal and sensitive. The general feeling though was that patients are making their own individual decisions about what they share with whom - and many of the online communities (from my perspective I would say particularly the DOC) are quite good at self-regulation, suspicious of 'miracle cure' nonsense and take all content with a healthy pinch of low-sodium condiment.

I suspect that quite a few in the audience were interested in gaining insight into how to 'leverage' social media channels (sorry, terrible industry phrase) on behalf of healthcare clients, private health providers and Big Pharma, it was encouraging then, that the panel recognised the crucial nature of transparency in these interactions. These online communities exist and are powerfully helping patients, but they are savvy, often fiercely independent and quite naturally suspicious of commercial interference. They will very quickly smell a social media rat if businesses come rampaging in with a clumsy marketing agenda.

It was great to hear the two healthcare professionals on the panel speaking so enthusiastically about their own use of social media in clinical settings (which seems to be on the increase as newly qualified HCPs come through who are already engaged in social media). Additionally there were some tantalising some glimpses of what might be coming next. For instance I had not heard of 'Watson' a computer system that is, apparently, better at diagnosing cancer than many doctors because it uses a constantly-updated database of research and evidence rather than relying on what it can remember from medical school and what Dr Sheh described as 'your own experience, prejudices and preconceptions'. What we need, he suggested, was the computer to number-crunch the data and evaluate the most likely diagnosis based on all the available evidence but then a sensitive, compassionate medical professional to interpret/relay that diagnosis in the light of the individual person in front of them.

The final question for the panellists was, 'What one change would you like to see?'. Half the panel wanted to see more involvement from healthcare professionals in social media communities, while Sneh Khemka rather pragmatically suggested that giving interactions/consultations over social media some sort of tariff so that healthcare professionals would come to see them as 'proper' earning work would be a sure-fire way to drive that.

Disclosure and all that. I wasn't paid to blog about this or attend the event. Diabetes UK kindly paid my train fare and Brandcast Media gave me a nice bottle of beer and some tasty nibbles at the end of the event. I decided against taking the notebook.
Tags: Big Pharma, Diabetes UK, DOC, events
Posted by Mike at 10:29
Email ThisBlogThis!Share to TwitterShare to FacebookShare to Pinterest