When we began this blog almost exactly three and a half years ago (crikey!) I had just made two important and, in their own small way, utterly life-changing discoveries.

One was that I wasn't anything like as good at managing my diabetes as I liked to think I was. And the other, and perhaps more important, was the extraordinary power, knowledge, support and cameraderie of the DOC hive mind. At that stage I felt that my control was 'as good as could be expected' and that diabetes was just pretty random every now and again. Years later I now understand both of those statements to be completely true, but in a very different way - and with the benefit of signficantly better control and confidence in handling my diabetes.

One of the main changes I made at that time, and perhaps the one that transformed my self-management more than any other, was to start testing more frequently, and to record the results more systematically. This information then enabled me to spot patterns in the apparent 'randomness' and apply the knowledge & experience of the DOC to experiment with the whole 'pretending to be my pancreas' business. Identify a problem... find out what others do... experiment... try something else... develop a strategy... test... review... adjust. None of that would be possible for me without a decent feed of data to try to keep track of the million and one variables. 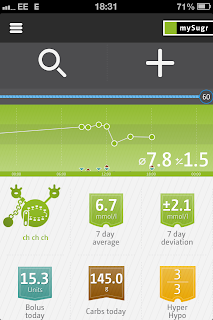 At first I used the ever-faithful pen and paper route, which is fine in its way, but doesn't really let you do anything with the information you are so carefully collecting. Shortly afterwards I started using different apps on iPod Touch and later iPhone (other smartphones are available etc...). I must have tried the best part of a dozen apps in quick succession before settling on one which allowed me to log and track everything I wanted to without making me want to chew off my own fingers in the process. A couple of years ago I saw a mention by Mike Young of Diabetes in Spain about an app he was using called mySugr so I had a look. I've been using it ever since. Recently they launched a major upgrade as v2.0 and to my mind mySugr has now become something really rather special.

This I think was the biggest difference I found when I first started using mySugr. The team behind it (which includes quite a high proportion of T1s) understand that logging, while potentially *very* useful is not the most fun to be had. Underpinning all mySugr's seriousness and analytical clout is a healthy dose of wit and charm. When you first set the app up you choose a name for your diabetes monster and every time you make an entry you go some way to taming it day by day. They turn diabetes logging into a sort of game, scoring points with every entry made. This may not appeal to you from the outside, but there is something inexplicably smile-inducing about the animated gurgling reactions of your monster when you make an entry - especially one that is above or below your ideal range, which is exactly when I need distraction most.

mySugr allows you to log all the things you would expect - BG (in mmol/L or mg/dl), carbs (in exchanges/CPs or grams), meal boluses, exercise/activity, basal dose for those on pens/syringes and temporary basal rates/duration for pumpers. Naturally you can also make copious notes alongside your entries which I find essential in terms of interpreting the data later. In addition you can also capture photos of meals and even add the geographical location at which the entries were made which is a nice touch. Entries can be tagged with one or more predetermined icons which range from the inevitable 'breakfast' and 'sport' to more emotional options like 'stress' or 'chilling' adding further detail to records. A very useful 'search' option allows you to quickly scan back through months worth of entries to find what you last tried for 'pizza' or 'chinese takeaway' then jump to those records to see how it went and what you might try this time.

mySugr operates on a 'freemium' basis. The fundementals of the app are available absolutely free of charge, but full functionality (eg photos with records) requires a 'pro' subscription. When you install the app you get all the bells and whistles for a few weeks. Following that you can just use the (excellent) core functions, pay a small monthly fee to upgrade to pro, or complete motivational 'challenges' to earn days of pro subscription for free by logging several entries per day or exercising. EDIT: As of January 2014 mySugr seem to be moving away from a subscription-for-pro set up towards a single payment model. EDIT2: ...and back to monthly subscription again!

The data analysis on offer in mySugr is excellent. The home screen (above) gives you a general overview of how things are faring over the last week/24 hours in different ways. The graph itself recolours to give you instant feedback if things are altogether too high/low (red) or a bit marginal (amber). There is a logbook screen with pleasingly swooshy draggable graph and table of entries that allows you to quickly scan back through previous week/month - the graph dragging side to side as the table of entries scrolls up and down. A separate analysis screen allows you to see 7-day, 14-day and month-by-month changes in average BG and crucially the SD of those entries (how closely grouped or wildly scattered they are). Dig a little deeper and you'll see a summary of numbers of high/low readings, tags, photos and other useful detail to help you work out what has been going on. If you enjoy your own number crunching and/or want to amaze and impress your clinic with how marvellously you are getting on you can choose between different .csv formats for Excel or export your data as a slick PDF report.

mySugr is registered as a 'medical device' and CE marked (I think it is perhaps the only logging app to have achieved this). Data storage is safe and secure and the entries are seamlessly uploaded and synced in the background. I experimented early on with this and if no data connection is available mySugr will just wait patiently without pestering you until a connection becomes available. If you own more than one device you can log from whichever is closest to you at the time and the data will stay in sync on all of them.

What? No niggly complaints?
If you've read a review here before you will no doubt be waiting for the 'but...' followed by a long list of things I really hate about mySugr. Well it surprises me as much as it might you that I can hardly think of *anything* I would change about the app. I would love to be able to edit the preconfigured list of 'tags', either to just hide the ones I'll never use, or preferably to allow me to customise the text myself. The options they have are decent enough, customisation would be perfect - I gather this is on the 'wish list' for future versions. There seems to be a slight glitch with data export for Excel in that dates are coming through as text rather than an Excel-friendly timestamp. This has almost no relevance to any other user I'm sure, but it makes some of my occasional attempts at analysis/graphing in Excel go a bit wonky. I'm going to drop them a line about that, and it's just the sort of thing they fix in one of their version updates. (Edit: as expected, this has now been fixed!)

So I quite like it then?
I noticed something a few weeks ago that really surprised me. The way mySugr helps me keep track of my readings actually helps me improve them in a way no other app has done before. There is a sort of 'sliding scale' of reward and motivation going on that on one level just lets me know if things are slipping a little, but then - even when they are pretty much perfect manages to encourage me to keep trying harder. That's not a bad effort for some lines of code, comedy noises and a sprinkling of funky graphics. In general terms the BG average and SD over 24 hours 7 days, 14 days or month-so-far offer me a ready reckoner of how well (or badly!) any time period is going. I have a tendency to think 'things have been terrible for ages' so it can be encouraging to look back a few days and see that results were not so bad after all and a little basal testing will probably fix things.

Aiming for amber
For about a quarter of this year things were not going well for me diabetes-wise. Looking back it wasn't a disaster (see previous para) but every month I'd hope for a better average, lower SD, fewer highs and fewer hypos only to find that the results would be slightly worse not better than the previous month's. Despite the fact that I felt like I was trying harder. This is not particularly encouraging... But following my annual Pump Clinic at the end of June where I made some small basal and ratio tweaks things all seemed to slot into place. Day after day with bewilderingly good levels. I felt like I was winning. Even when we were away on holiday (a notoriously chaotic experience for my BG in previous years) I pushed to maintain this success*. Why? Well during this period I began to notice the 'high/low' marker on mySugr's home screen (see the big picture above) was no longer it's customary Red. Quite often it was Amber. Once or twice it was even Green! So in a rolling 7-day period I would find myself pushing to avoid a high or low reading that day, because if I could make it with a 'no hitter' then tomorrow the wobbles from this time last week would disappear and I'd be in amber again. I was playing my diabetes like a game.

The fact that my logging app was providing that motivation should make the folks at mySugr very pleased indeed.

mySugr is available for iOS devices in the App store and an Android version is currently in 'beta test'.

* Fear not. Normality is resuming this week... along with some set failures and hilariously jaggedy mySugr graphs that well and truly revoke my #teamsmug membership.

Disclosure: I wasn't paid to write this review and I have no commercial interest in mySugr at all. I was lucky enough to be one of the beta-testing volunteers for 2.0 and have spoken to Frederik a couple of times but that's it.
Tags: DOC, gadgets, review
Posted by Mike at 17:30
Email ThisBlogThis!Share to TwitterShare to FacebookShare to Pinterest