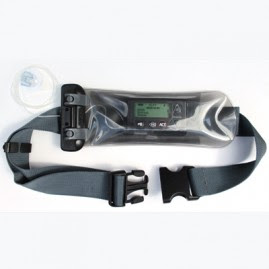 The sun is shining... thoughts turn to Summer holidays.

This year we will be returning to Cornwall, to the very same place we stayed a few years ago. When we were there before the girls and I quite fancied a little gentle sea-kayak pottering in the wide open bay on our doorstep but never quite managed to bump into the kayak hire people who seemed to have a rather relaxed approach to timekeeping (and attendance in general). This year we are hoping to give it another go.

The last time we were there I was on MDI, but this time, of course, I have Artoo to think about.

I don't suppose we will be out for very long so I could just detach and leave the pump on the shore. I suspect there will be enough activity involved in paddling to make hypos more of an issue than raging highs, so the lack of basal for an hour or so would probably not be much of a problem. But... what if something happened. The last thing I'd want if anything untoward were to occur would be to be bobbing about awaiting rescue with the added 'excitement' of being just a few hours from DKA once my last bit of basal runs out.

Having asked around I've had very good reports of the Aquapac waterproof pump case, so I've decided to order one. The case is clear so I will be able to check on how Artoo is doing and it's waterproof enough to cope with anything from a bit of gentle splashing to some full-on dunking - for a short while at least!

All we have to do now is hope the kayak hire people actually turn up!
Tags: family, gadgets, insulin pumps
Posted by Mike at 10:29
Email ThisBlogThis!Share to TwitterShare to FacebookShare to Pinterest