When I looked down the list of topics for DBlog Week I knew this one was going to give me some trouble... Something about diabetes that I nearly always do well? Talk about a hypodermic in a haystack. Tomorrow's topic of something I need to improve on is noooooo trouble at all. How many would you like? How long have you got? But something diabetes-related that I do well? Hmmmmm...

I nearly wimped out and posted about how brilliantly supportive and understanding my family is (however grumpy I get). Or how amazing the information, hints and tips are that come flooding from all corners of the DOC at the first keystroke of a 'Bah! Having a rubbish day today' tweet. But then it struck me as I fished a fluffy fruit pastille out of my pocket to counter what might (or might not) have been a slight dip in BGs. There is a little thing that I have done ridiculously well ever since I was diagnosed. Every day! It's so much a part of my life that I no longer even think of it, but occasionally when it is mentioned to non-D types I get met with a raised eyebrow and just a hint of "Well that's a bit weird" behind the eyes.

I am amazing at carrying hypo treatments around. I don't think I've gone anywhere in the last 20-odd years without pockets full of goodies 'just in case'. In sweetie-carrying terms I am way more reliable than a Werthers Grandfather (who only managed a measly 15 years). I have treatments. I have backups. Occasionally I have backups of my backups.

Just after I was diagnosed I was advised that I'd have to carry something sweet on me at all times. I found a little tin in a giftshop that had a nice vintage-label design printed on the lid. Initially I carried dextro-energy tabs in it, but they were vile and I discovered that it was just big enough to carry three of four sachets of sugar - the kind you get in cafés and coffee houses so took to carrying them instead. For many years I siezed hypos as an opportunity to have a funsized chocolate bar (even after I knew that chocolate was nothing like fast-acting enough really). I would have chocolate in my coat pocket and the tin in my jeans. The tin became my 'last line of defence'. If ever I was anywhere and the shops were shut or there was just nothing around I would at least have something that might keep me going. I began to develop heirarchy of treatments based on their suitability to the time of year. Skittles and Jelly Babies come in small bags in some funsize assortments and are virtually indestructible in a jeans pocket during the Summer - even in 80% humidity and scorching temperatures on a brief stay in Singapore.

These days my weapon of choice in tackling hypos is certainly Fruit Pastilles. A whjole pack is just a tiny bit too long until you have had the first two or three but I like to think the extra strain that puts on the tube gives it a lovable 'crumpled' quality. And the hypo-addled T2 came across and helped out a few months back didn't seem to mind. (I was able to give her a spare pack that was acting as the backup to my backup).

And the tin still goes with me. Everywhere. There's not a scrap of paint on it now, of course. It has been polished to a gleaming shine by thousands of hours in my pocket, and is just very slightly dented. 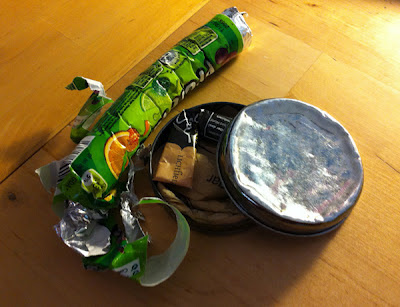