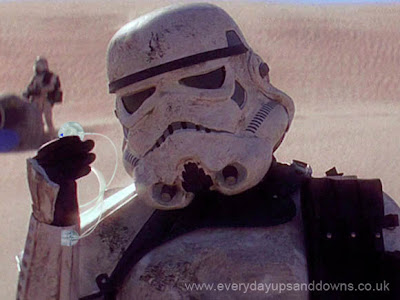 Not very long ago (yesterday in fact) in a clinic not very far away... the adventure began.

Perhaps it is because I was eight years old in 1977? Perhaps it's because Dave and I have both been wrestling with the idea of turning to the 'dark side' for quite a while now?

For twenty odd years I have been using daily injections as a replacement to my pancreas. As recently as a year ago I was absolutely certain that despite the hype, an insulin pump was not for me. Pumping had been first suggested to me in perhaps 2002 or 2003 and I really couldn't see the appeal. All the carb guesswork, differing levels of activity and million-other variables would still be there messing things up, after all. The consultant who suggested it could not explain to me why it seemed to work better, just that it did. Over the last two years I have worked, noted, tweaked, experimented and focussed on improving my control as never before. But as good as things ever got on MDI it was still not good enough. In the weeks running up to my Annual Review the choices seemed pretty clear. A small change (to a different background insulin) on MDI, or a big change to pump therapy to see if it would work as well for me as it seems to for everyone else. Whatever I did with MDI, the hypo-squashing, control-improving, BG stability promise of the pump would still be there. It was time to try Replacement To Pancreas #2 (r2-p2).

So I'm typing this with a little robot counterpart attached to me. 'Artoo' and I have a long way to go.

First impressions are pretty good. Though to be honest since I have nothing to compare it with, how can I know? The first cannula I inserted (with the help of the lovely LJ, the DSN in charge of pumps at the hospital I go to) went in fairly painlessly with Medtronics spring-loaded Quick-Set gizmo. I was told that they often itched a bit for the first hour, but that it should settle. Four hours later it was itching like crazy, especially when I fake-bolused some saline through it. I'm not sure I had expected to constantly feel the presence of a set. And of course it may just be that, given that these are the first few hours, I am just hyper-aware of everything and that it is just all in my mind. Nevertheless, having read the first chapters of John Walsh's brilliant Pumping Insulin, and given that my week on saline is in part about experimentation, I decided to replace it in case something had gone wrong with the initial insertion.

The second try went pretty much the same as the first. Stung a little to start with - like an MDI injection where you nick a capillary except that it goes on feeling like that rather than going away in ten minutes or so. I've stuck with this one to see how things progress. I know different sets suit different people, it may just be that 9mm Quick-Sets are too long and 6mm would be better - or that I don't get on with the adhesive... or something else entirely.

I think that's the thing that is striking me most. This is a Paradigm-shift (ho ho!). It's absolutely like being diagnosed again. I have no experience to tell me whether this or that 'feels' right or wrong. Whether this sensation is fine, or a signal that something needs to be looked at.

It makes me very glad I have a week on saline to just get my head around the mechanics of it.

I've at least two more set-changes to go before I go back to the hospital to get started on insulin. I'm going to experiment with a shorter Quick-Set and a Sihouette to see how I get on with those.

If you are a veteran pumper with pearls of wisdom, or a wrestling with your own decision about pumping it would be great to have your comments.

UPDATE: WDD 2011 and some pumping firsts
Tags: annual review, insulin pumps, it was bound to happen, pump-averse
Posted by Mike at 09:01
Email ThisBlogThis!Share to TwitterShare to FacebookShare to Pinterest