Waiting for the storm 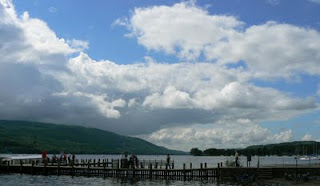 Things have been going quite well for me control-wise recently. Monthly averages not too shabby, and particularly over the last few weeks where my meter shows an average of around 6.4mmol/L (115 for US types) with hardly any hypos by my standards, and an SD between 2.0 and 2.7. The Accu-Chek Expert is the first meter I've had that shows 'Standard Deviation'. A mathematical concept slightly beyond my meagre adding-up ability, I gather that it demonstrates the variance in a set of numbers above and below the average. Neatly it also reports it in the same units, which means that you can get an idea of the general 'spread' of your BG results. The smaller the SD the more tightly grouped the results (which is a good thing in terms of BG results fact fans). An average of 6.4 and 2.5 SD would mean that almost all of my 14-day results including the post meal ones lie between 3.9 (70) and 9.9 (178). For me that is smile-inducingly good.

But last Friday was the end of term.

I'd been watching its approach like a ink-black cloud on a summer's day horizon. Hoping that it would not mean what I feared it might. Regular readers will know quite how well I've done with holiday periods recently. In short, not very.

So I'm steeling myself for a slightly wobblier period over the next few weeks. Last summer I seemed to manage pretty well, though I think my control has improved since then. At least when the kids are off school over the summer I have a few more weeks to try to find the new rhythm. I'm hoping it will just be a matter of getting some sort of holiday basal working to account for lack of gym visits, and that the new big meal strategy will continue to work its magic. Maybe.

I'll let you know how I get on.
Tags: accu-chek aviva expert, blood-glucose, family
Posted by Mike at 09:25
Email ThisBlogThis!Share to TwitterShare to FacebookShare to Pinterest